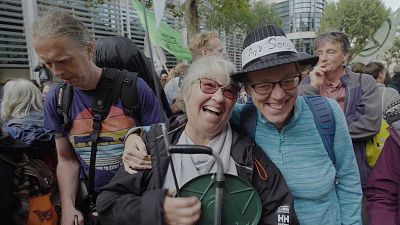 Last April, more than a thousand protestors were arrested across London.

A group of climate activists calling themselves Extinction Rebellion (XR) blocked roads, chained themselves to buildings and settled into makeshift camps. This was all in an attempt to get governments around the world to listen to their concerns about the growing climate emergency.

It was expectedly controversial. Prime Minister Boris Johnson called the activists “uncooperative crusties” and over time a decentralised approach to organisation led to missteps which unfairly targeted working people. Valid criticisms centred on class and race were also raised around their use of arrestable actions to bring press coverage.

As XR plans its upcoming, global September rebellion, a documentary has been released looking at why some of its members believe non-violent disruptive action is necessary. Created by award winning director Sasha Snow, the film follows the personal awakening of two people who got involved in this international wave of protest.

Controversial figure and now ousted co-founder of the group, Roger Hallam is the focus of “The Troublemaker”. The release is timely as Hallam was once again arrested earlier this week and charged with conspiracy to cause criminal damage.

He isn’t the only activist to make an appearance on camera, however. To get a sense of what motivates ‘ordinary’ people to get arrested as a form of protest, I’m more interested in the film’s co-star, Sylvia Dell, a mother of four and grandmother from Devon.

‘It came like a bolt out of the blue for me’

Until just a few years ago, Dell led a relatively normal life. “I did all the usual things. I went on holiday, we flew, we had cars,” she tells me when we sit down to chat about her involvement with the film and her journey as an activist.

After health issues forced her to give up work, she was expecting life to slow down a bit. “I assumed that I would recover from my health issues and probably do some part time work and have a quieter sort of retirement. More time with the family, more time gardening, just generally a normal sort of life.”

It didn’t quite pan out that way for Dell, though. “Not that long after I finished work, the IPCC report came out in 2018,” she explains.

When she happened to come across an article about the report the same day it was released. Dell was shocked that there were just 12 years left to turn things around. “It came like a bolt out of the blue for me that I couldn't believe that it was so close.

“I'd known about the climate emergency, and I was doing my recycling, I was doing the things that we were told to do, but I wasn't really paying that much attention.”

It completely changed her life. “I was really depressed for months then my marriage broke up, and I was reading stuff that was making me ill but I couldn't stop,” she adds.

I went into this church hall and there was getting on for 100 people there who all got it, and they had a plan.

Dell had been on marches for other causes but recounts how inaction from the government had left her disillusioned. “I knew by then that just being a good citizen, and, you know, marching and voting, and all of that just wasn't enough because our democracy is broken.”

This was the point at which XR came into her life. She tells me it offered a place to meet with people who thought the same way she did. “I went into this church hall and there was getting on for 100 people there who all got it, and they had a plan.”

They were going to disrupt London for a week, or more if necessary, to make politicians listen to them. Dell says she felt a real sense of hope at that meeting, that this small group of people could do something big but only if they could “make enough noise and make it in the right way, and if we are prepared to get arrested.”

‘I got arrested as an observer’

After training and attending a few protests as a legal observer, a volunteer who supports the legal rights of activists, it all came to a head for Dell. “I got arrested as an observer.”

“I wasn't part of the protest. I didn't want to get arrested,” says Dell. But, after her buddy was taken off by the police, she was distraught and decided to go with him.

“They targeted the singers, the musicians, the legal observers, they targeted the people who were there for the welfare of the protesters and that made me really angry. How could they do that?”

By the end of that week of action in April 2019, Dell found herself locked to a sound stage on Waterloo Bridge. Although controversial, disrupting the busy streets of central London seemed to be getting the message across, she explains. “We got parliament to declare a climate emergency. I thought ‘Yes, finally it's working.’”

Roughly two weeks later, a third runway at Heathrow Airport was announced. “I was Heartbroken.

“I could not fathom how people with a modicum of intelligence could see the science, could see what the United Nations reports have been saying for a long while. See how severe it's becoming and how it's now affecting even the UK and yet they'd agree to add 40% capacity - carbon emissions the size of Cyprus, onto what is already one of the biggest carbon emitters in the world.”

As part of a splinter group called Heathrow Pause, Dell had a long chat with the airport’s sustainability director. She says he told them about plans to rewild peat bogs, organise their flights more efficiently to save fuel and offset their emissions.

“At the end of the day, he was effectively making other industries reduce their carbon just so aviation can continue, just so fossil fuel industries can continue,” she tells me.

Things escalated and nearly 20 activists, including Hallam and Dell, were arrested after announcing plans to fly drones close to Heathrow. There was a lot of backlash from the public and other members of XR who said the action was unsafe and could alienate people who might otherwise support their demands. I ask her what she would say to people who believe this kind of action is counterproductive or damaging to the cause.

'I want to do it to protect them'

Dell acknowledges that getting arrested is not an option for groups for whom can have a much bigger impact on their lives and mental health. “It was not a difficult experience for me,” she says.

Although she is enthusiastic about the younger generations standing up for a world that they are going to have to live in, she is worried about what it could mean for them in the future. She doesn’t encourage her own children to get involved in these kinds of actions; “I don’t want them to get arrested. I want to do it, to protect them because the consequences for them are so huge.”

“If I get a criminal record, you know, it doesn't really matter. For them, they've got the rest of their lives ahead of them and it will make life even harder in what is clearly going to be hard times.”

She says arrestable action is definitely not the only way to get involved, especially now that governments are starting to take notice. Dell isn’t even sure right now, with the ongoing pandemic, whether she will be taking part in the upcoming protests in London. “We shouldn't need to now because the message, you know, it's getting out there. Now we need people to drive that forward, using whatever channels we have.”

With this year’s rebellion significantly scaled back, there is instead a push to get people to back the Climate and Ecological Emergency Bill. Developed with experts, members of XR and Friends of the Earth's Big Ask campaign, it would get the government to put a serious plan in place to deal with its share of carbon emissions and protect nature, in the UK and overseas.

It also backs the call for a citizens assembly, like the one that has seen recent success in France, so that ordinary people can have a say in what they believe needs to be done about the climate emergency.

“At the moment, I'm trying to lobby young people that I know to write to their MPs, about the Climate and Ecological Emergency Bill,” says Dell.

“If everybody can get behind that bombarding MPs with emails and letters, then that has a big impact.”

_The Troublemaker is out now and available to view free until 22:00 BST on Thursday 27th August here. _