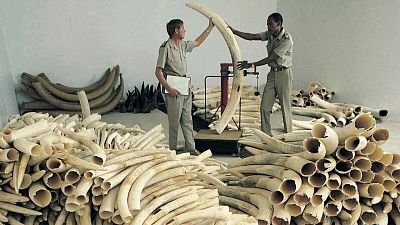 Nine tonnes of elephant ivory were destroyed this week in Singapore.

It was the largest ivory crushing event in recent years and the nation was willing to forgo S$18 million (€11 million) worth of the rare material in the process. By pulverising the ivory in an industrial rock crusher, Singapore demonstrated its strong stance against the illegal wildlife trade.

The event takes place over several days in the run up to World Elephant Day and is a way of honouring the much-loved species. On 11th August, it was streamed live online by NParks Singapore, a National Parks board of the government which is responsible for managing urban ecosystems. According to NParks, the destruction of the ivory on such a large scale will disrupt the global supply chain, thus preventing it from re-entering the illegal trade market in future.

At the same time, the board launched Singapore’s first Centre for Wildlife Forensics (CWF). The centre plans to analyse specimens involved in illegal trade and galvanise the nation’s role in the international fight against it. The CWF will focus on the wildlife most severely impacted, such as elephants, rhinoceros, pangolins, sharks and rays, and songbirds.

So far, Singapore has seized record amounts of pangolin scales and elephant ivory that were en route to the other countries in the region.

“The launch of a Centre for Wildlife Forensics in Singapore represents a major step towards strengthening the country’s knowledge and capabilities,” states UN CITES Secretary General, Ivonne Higuero.

“The Centre will establish a dedicated capacity building entity for enforcement officers, providing training for the complex task of detecting illegal wildlife and wildlife products. This is exactly the kind of response that is needed to tackle illegal wildlife crime. Forensic applications must fully be used to combat illegal trade in wildlife.”

The dangers of the ivory trade

Around 100 African elephants are killed every day by poachers seeking ivory, meat and body parts, with only 400,000 remaining, according to WWF. Much of the demand for ivory comes from Asian countries such as China and Vietnam, where it is turned into jewels and ornaments.

However, China enforced a ban on elephant ivory trade in 2017, and environmentalists are fighting for the surrounding countries to follow suit. Although selling ivory is forbidden in Vietnam, the black market allegedly continues to thrive as a result of a law stating that ivory can be used in decorative objects and jewellery.

These sophisticated smuggling rings are allegedly sourcing ivory and rhino horn in Mozambique, before bringing it into Vietnam where it is being sold onto mostly Chinese customers, reports ITV.

But Europe isn’t innocent either. Charity Rainforest Rescue is demanding an outright ban on ivory trade across the continent.

“The EU sees itself as a conservation leader, yet it has a blind spot for the ivory business. The trade in “antique” ivory remains legal in the EU – a convenient loophole to launder tons of freshly poached tusks and export them to Asia,” states the charity on its petition page.

Alongside numerous animal welfare and conservation organisations, an open letter to the environment ministers of the EU Member States was sent in 2019. “As actions are increasingly being taken around the world to close domestic ivory markets and destroy stockpiles of seized and confiscated ivory, the world now looks to the EU to take responsibility to end its own role in the ivory trade,” it said.

Environmental crime is a serious issue all over the world. Arthur Paré works with a team of environmental lawyers at Géosmine in Paris to expose crimes like illegal wildlife trade, resource extraction and pollution.

Paré describes it as “the most lucrative but least repressed illicit industry in the world.”

Commenting on the news this week that Singapore crushed nine tonnes of elephant ivory, Paré argues that while it's an important step in the right direction, it might not be enough.

"The 8.8 tonnes of tusks they are destroying are from the shipment seized in July 2019, which came from the DR Congo. The illegal goods were attempting to enter Vietnam via Singapore, which is the main transit hub of wildlife trade in the world," he explains. "But this same shipment also contained 12 tonnes of pangolin scales (worth USD 35 millions) and timber. No one is talking about where they went - so we still have no idea of what happened to them."

"Between 2009 and 2019, Vietnam was involved in over 76 tonnes of elephants tusks seizures - that's 11,500 elephants," he concludes. "There is still a long way to go before ivory trafficking is tackled at the source."