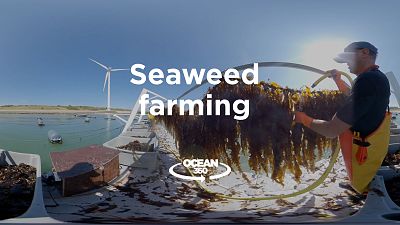 In Europe, we don't often think of seaweed as a food. Our algae industry is still relatively small, relying mostly on the collection of wild seaweed. But that is expected to change, as resources on land come under increasing pressure.

In the Netherlands one organic seaweed farm called Zeewaar offers a good example of what a booming coastal industry could look like in the not-to-distant future.

Seafood - including algae - will be increasingly important for global food security, according to the European Union and the UN Food and Agriculture Organization.

With sustainable farming methods, we can increase our production of seaweed without harming the marine environment. As a source of vitamins, minerals, antioxidants and proteins, algae also ticks the boxes when it comes to building sustainable food system’s in Europe.

Good for the environment

But it’s not only food. Seaweed farms contribute to carbon sequestration, mitigating climate change. Algae in animal feed can reduce Europe's dependence on imported soya, contributing to the fight against deforestation.

In line with the European Green Deal, algae farming can support sustainable economic growth, employment and the bioeconomy in coastal regions and across Europe. That's why the EU has deliberately targeted support towards the algae sector in its Farm to Fork Strategy.