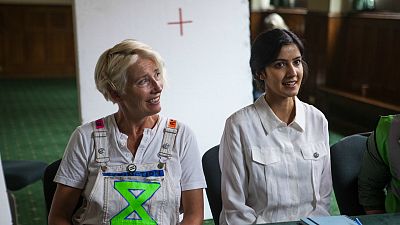 Tomorrow will see the release of a new short film starring Emma Thompson about Extinction Rebellion. The film depicts a fictionalised version of the protests held by the activist group last April, which culminated in the UK becoming the first country to formally declare a climate emergency.

The double Academy Award winner took part in last year’s climate protests, which saw parts of the UK’s capital grind to a halt during a fortnight of continuous civil disobedience. It was during this time that the short film, entitled Extinction, was shot.

The 12-minute production tells the story of a group of climate activists meeting with the Environment Minister in the midst of an ongoing rebellion. The film will be available to view online, for free, from 12:00pm BST tomorrow.

Emma Thompson explained the importance of both the piece and the movement more generally, saying, “Everything depends on what we do now. In a crisis, you have to convince people to take positive and immediate action. The suffragettes taught us that. You have to be active in your disobedience.

“I hope this film makes protest seem as useful and as maddening as it is. I hope it illustrates the frustration of trying to get through to government officials who can’t hear anything but the sound of their own voices.”

Co-writer Sam Haygarth (also known as Sam Knights), who featured in the recent Oscar-winner Jojo Rabbit, is all-too familiar with the process of blending activism with art. Last year he performed his debut stand-up hour at the Edinburgh Fringe Festival detailing his experience at the heart of Extinction Rebellion, including his subsequent arrest for glueing himself to a central London hotel while protesting an oil conference. For Haygarth art and activism are intrinsically linked. He believes that “it is the duty of writers and of artists to work towards a just and sustainable future.”

The coronavirus crisis will shape the environmental movement

Some may argue that mid-pandemic, as the world is gripped by the coronavirus crisis, now is not the time to focus on a project like this. But Haygarth explained that though the film “may get lost in the current news cycle, it contains some really important lessons for the current times.

“How we respond to the coronavirus crisis is a test run for how we need to respond to the climate crisis, and we see the same forces attempting to obscure and to undermine science in pursuit of perpetual growth and private profit. Whatever happens next, we can be sure that ‘business as usual’ is no longer tenable.”

The team behind Extinction have emphasised that the project involved an even split of genders, with the labour divided equally among the team. Emma Thompson, for example, made her own costume. Haygarth explained that it was really important to the group, particularly director and co-writer Jack Cooper Stimpson that the ethics of the movement were carried throughout the production. He said, “It was really important to us that this film was not just a film about climate justice, but a film which embodied the values it seeks to advance.”

Extinction Rebellion has received criticism from all sides of the political spectrum in the past, particularly during last year’s London shutdown. Ben Smoke, from the Stansted 15 protests, criticised the group’s use of deliberate mass-arrest, branding them “privileged activists” in The Guardian. While others were unhappy with activists shutting down public transport in Canning Town, a historically working class part of London. Critics argued that by disrupting working class commuters, using public transport, the protestors risked damaging the cause and alienating supporters.

Haygarth says that this is part of what the film aims to explore; by focusing on the ordinary people at the heart of a swelling movement, it considers the fallibility of those involved. It’s one of the reasons the piece isn’t a documentary, but a piece of fiction, looking at the “inherently comic” notion that climate activism is being led by normal people. He explains that the piece considers “how prone to mistakes the movement is. It’s all part of the story.”