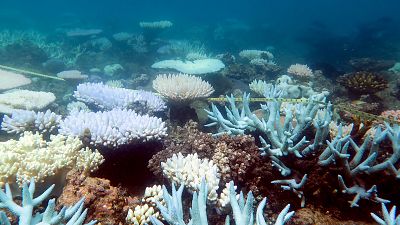 The 345,400-square kilometre World Heritage-listed coral network has now been devastated by five coral bleaching events since 1998. The most deadly were the most recent, in consecutive summers in 2016 and 2017.

A study of coral bleaching on the reef, published in the journal Nature in 2017, found 91 per cent of the coral reef had been bleached at least once during bleaching events of the past two decades.

A consequence of climate change and rising ocean temperatures, coral bleaching occurs when water is too warm, causing corals to expel algae living in their tissue, which turns them white. If a coral is bleached, it doesn’t mean it is dead, and if it is only a mild or moderate level of bleaching, it will often recover. However if coral is severely bleached, it has a higher chance of dying.

The Australian Research Council Centre of Excellence for Coral Reef Studies is conducting aerial surveys, and its director Terry Hughes has been posting updates throughout the week.

The authority said heat accumulation, particularly in February, led to this bleaching event.

“Climate change remains the single greatest challenge to the Reef,” it said on its website, calling efforts to reduce global emissions “essential” to saving the reef.

Kate Smolski, acting programme director of Greenpeace Australia Pacific said: “The fact is, climate change is driving catastrophic reef bleaching, and the coal industry is the biggest driver of climate change in Australia.”

“In order to protect the Great Barrier Reef, we need real solutions to address the climate crisis which is being driven by the burning of coal, oil and gas.”

The Great Barrier Reef, off the coast of Queensland, Australia, is the world’s largest reef ecosystem.

Earlier this month, David Wachenfeld, chief scientist at the Great Barrier Reef Marine Park Authority, said ocean temperatures over the next month will be crucial to how the reef recovers from heat-induced bleaching.

“The forecasts ... indicate that we can expect ongoing levels of thermal stress for at least the next two weeks and maybe three or four weeks,” Wachenfeld said in a weekly update on the reef’s health.

The Great Barrier Reef Marine Park Authority last year downgraded its outlook for the corals’ condition from “poor” to “very poor” due to warming oceans.

Australia pledges millions to save the Great Barrier Reef