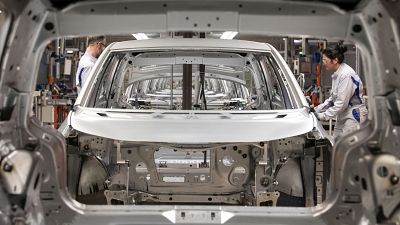 Workers complete an electric car ID.3 body at the assembly line during a press tour at the plant of the German manufacturer Volkswagen AG .   -   Copyright  Jens Meyer/AP   -
By Rosie Frost  •  Updated: 25/03/2020

Concerns about whether electric cars might actually increase your carbon footprint are a myth, according to new research.

Replacing petrol and diesel with electric vehicles features heavily in many governments' plans to achieve greenhouse gas emissions targets set by bodies like the IPCC. Norway, Denmark and the UK are just some of the countries set to ban fossil fuel-powered vehicles in the next 30 years to encourage drivers to make the switch.

Making up 24 per cent of all emissions from burning fuels, it is easy to see why the electrification of transport makes up an integral part of plans by policymakers around the world. However, some have voiced concerns as to where the electricity needed to charge this brand new fleet of electric vehicles (EVs) will come from.

Are electric cars being charged by fossil fuels?

For countries like Norway, the infrastructure is already there to ensure that charging points are supplied using renewable sources but for others, the reality is that much of this electricity will be generated by fossil fuels. Media reports have also questioned whether manufacturing processes could be a source of further environmental impact.

A new study from the universities of Cambridge, Exeter (UK) and Nijmegen (Netherlands) has taken a look at the environmental impact of the entire lifecycle of an electric car. Whilst producing EVs involved higher emissions, they found that switching away from fossil fuel vehicles was overall still better for the environment. Researchers used data from 59 world regions to show that in 95 per cent of cases electric alternatives were less emissions-intensive.

“We’ve seen a lot of discussion about this recently, with lots of disinformation going around. Here is a definite study that can dispel those myths. We have run the numbers for all around the world, looking at a whole range of cars,” said Florian Knobloch, lead author of the study. Hence, electric cars are still greener than

If by 2050 one in two cars on the road were electric, the study predicts that carbon emissions would be cut by 1.5 gigatons a year. That is roughly the same amount of CO2 as is currently created by Russia annually.

The only exceptions were found in countries like Poland where electricity generation relies heavily on coal-fuelled power stations. For those that have already undergone massive decarbonisation, like Iceland and Sweden, EVs could be up to 70 per cent less carbon-intensive per kilometre. Others like Estonia and the UK who still rely on fossil fuels still saw reductions of between 30 and 40 per cent.

“Even if future end-use electrification is not matched by rapid power-sector decarbonisation, the use of EVs and HPs almost certainly reduces emissions in most world regions, compared with fossil-fuel-based alternatives,” explains the study.