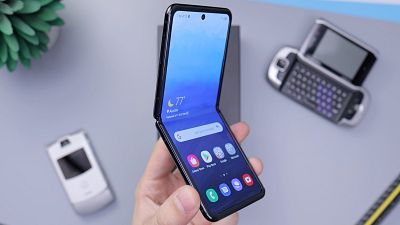 Foldable phones, screens you can stick on your skin; groundbreaking flexible technology that usually relies on single-use plastics could get a sustainable makeover using a new material made from fish scales, a study published by the American Chemical Society has found.

Glowing displays are everywhere now from the front of magazines to promises of unintrusive wearable tech that would allow you to stay switched on wherever you are. Foldable phones, even, have become a hot topic for innovation enthusiasts with their promise of larger screen sizes that can still fit comfortably in your pocket.

At the moment, in order to make these displays bendy enough to be put into things like magazines or watches, the light-emitting components have to be layered on to a thin plastic film. Once these devices aren’t needed anymore that means the fossil fuel-based material becomes just another source of pollution that ends up contributing to the mountains of plastic we already use. Scientists instead wanted to find a sustainable solution to this problem and have discovered that fish scales could provide a viable alternative. With 70.5 million tonnes of fish waste produced each year by the fishing industry, its a novel use for this otherwise unutilised waste material.

In laboratory tests, researchers at a group of universities in China used the scales to create a kind of gelatin which, once dried, has the same attributes of flexibility and transparency as the plastic that is currently used. In trials done by the team, a screen created with the film survived being bent 1,000 times without losing its ability to glow. This durability is vital for wearable devices and would mean that the fish scale alternative could easily replace the plastic used in these devices.

Unlike their persistent predecessors, the biodegradable film is unlikely to hang around for long in landfill as it degraded in 24 days when buried in soil. Researchers also found that it could easily be dissolved in warm water and then recycled to create new electronic displays.

The researchers have suggested that this technology could be used to create high tech digital tattoos that would allow you to get all kinds of information straight on your skin. Foldable displays and devices used to monitor health are also listed as possible applications for this promising alternative. Innovation like this currently relies heavily on plastics and so a plentiful, biodegradable alternative could help make this futuristic tech a lot greener.