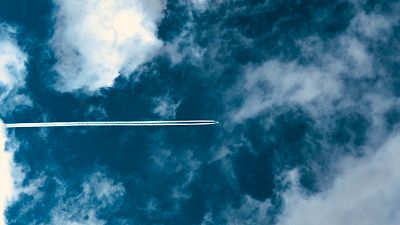 These cloud trails are created by ice crystals that form around carbon particles emitted by the engines.   -   Copyright  Unsplash
By Rosie Frost  •  Updated: 19/02/2020

Altering the altitude of a small chunk of flights could lead to a massive reduction in their effect on global warming, researchers in Germany and the UK have found.

Contrails, the long white clouds that crisscross the sky on a clear day, are created when ice crystals form around tiny particles of carbon emitted by a plane’s engines. These don’t tend to stick around for long, usually only a few minutes, but in some climates, it is possible for them to merge together and last up to 18 hours. Joining with the natural formations, they then create a blanket that prevents heat from escaping the atmosphere at night.

Scientists are increasingly finding that the effect from these clouds on global warming could be just as bad, if not worse, than that from the carbon emissions of the plane itself. It could be set to rise as well with a study from the Institute of Atmospheric Physics in Germany predicting that contrail-related warming will triple by 2050.

The good news is that because the trails need very specific weather conditions to hang around, only around 2 percent of flights actually contribute to this effect. Looking at all of the planes that travelled through Japanese airspace in six weeks, scientists at Imperial College London found that this very small percentage of flights was responsible for a massive contribution to global warming.

"A really small proportion of flights are responsible for the vast majority of contrail climate impact, meaning we can focus our attention on them," lead author, Dr Settler told Science Daily.

Going around the wide and flat areas of cold, humid weather that cause the cloud cover to form previously been rejected as a solution because diverting around it used a lot more fuel. What the researchers in this study propose instead is going above or below by changing the plane’s altitude. This increases fuel usage by less than one percent whereas if this were done for just 1.7 percent of flights, the warming effect of contrails could be reduced by nearly three fifths.

Researchers also looked at the impact of using cleaner engines that didn’t emit as many of the carbon particles that cause the trails to form. Switching to these alternatives, they found, would reduce the climate impact of contrails by 68.8 percent. When combined with the slight alterations to flight paths that means for contrails alone environmental effects would drop by over 90 percent, cutting the overall climate impacts of flying by more than half.