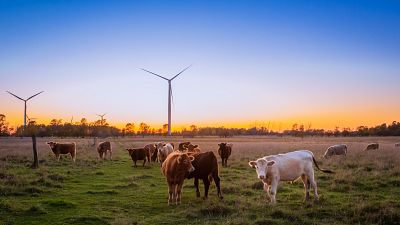 “It’s not common knowledge that meat is a resource reaper, so we’d like to show people the scale,” explains Hanna Pamula, a PhD student at AGH University of Science and Technology who has created a tool which calculates the carbon footprint of your food.

The Omni Calculator Project is run by a small team of scientists in Poland who are developing ways to help people work out everything from body fat to the cost of Brexit and this meat footprint calculator is just the latest addition. Using data from over 1,500 studies across 120 countries on animal agriculture, the tool looks at carbon dioxide emissions, land use, water and air pollution.

Even frequently neglected factors like eutrophication, caused by too many nutrients in the soil, were taken into account in their calculations. Although results vary depending on where the meat was produced, the tool averages these out to give you the most accurate numbers.

One serving, according to the project, is 85g or a portion roughly the size of a deck of cards. There are five different common animal protein sources you can choose from: lamb, fish, pork, beef and chicken. One of the most revealing results from the data the team used was that even the lowest-impact animal product exceeds the impact of the average vegetable substitute by quite a significant amount.

Pamula and the Omni calculator team think that providing information about our individual carbon footprint easy will encourage people to make eco-friendly decisions. “We try really hard to create attractive tools that have educational value,” she adds, “such ecological calculators should be as user-friendly and easy to understand as possible. Thanks to that, people actually start using the tools and are more and more aware of environmental issues.”

It isn’t just the health of the planet that the tool wants to improve but yours as well. “We wanted to show that reducing meat consumption can be profitable not only for the environment but also for your health,” says Pamula, “Apart from sodium and saturated fatty acids intake itself, the diet change may be profitable to your health.”

She suggests that the less meat you eat, the more you will reach for protein-rich legumes, pulses and nuts which can significantly reduce the risks of heart disease, high blood pressure, stroke and type 2 diabetes. Environmental benefits aside, increasing numbers of people are adopting these small dietary changes for the sake of their own individual health.

Do I have to go vegan?

The amount of meat eaten around the world has quadrupled in the last half a century to roughly 320 million tonnes each year. That’s the equivalent of over 950 million cows. If we all adopted the average American diet then we would need more than one planet to provide the amount of land needed to create that much meat. Changing to a vegan diet, Pamula suggests, could reduce this land use by up to 75%.

A plant-based diet isn’t for everyone, however, and simple changes like a few meat-free days a week could have a big impact with all kinds of meals meeting that could be called “planet-friendly”. Any increase in your intake of vegetables is beneficial and adopting a flexitarian diet, for example, could provide the answer to avoiding the damaging mountain of meat we currently consume in the West.

Staying away from animal products could be the best way to reduce your carbon footprint, according to recent scientific studies. The UN’s Intergovernmental Panel on Climate Change (IPCC) suggests that high consumption of meat and dairy in the West is fuelling global warming and urges those looking to lessen their environmental impact to cut down on meat, milk, cheese and butter.

It’s more about having a moment of reflection than it is pushing people to completely transform the way they live. “We would like to encourage everybody to cut down on meat, not become vegan today,” Pamula says. She hopes that having the exact figures for personal choices could better inform people thinking about making this kind of change. “The huge numbers showing the meat impact give the opportunity to reflect on our meat-rich diet,” the PhD student explains, “maybe we can cut that burger or chicken nuggets from our daily menu.”

Have a go below and find out the impact of the meat you eat.