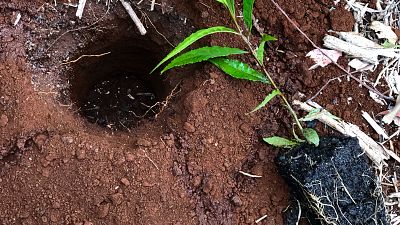 Ancient rainforests have been damaged by the raging wildfires.   -   Copyright  ReForest Now
By Rosie Frost  •  Updated: 22/01/2020

On the 23rd of January eco-friendly search engine, Ecosia will be donating 100% of its profits to help replant Australia's native trees.

The country has had a devastating wildfire season this year as a result of an extremely dry and warm spring that became a record-breakingly hot summer. Across Australia, somewhere between 10 and 17 million hectares of land has been burnt, that's an area the size of South Korea.

Many endangered animals have been killed by the widespread fires but even those that have managed to escape face the destruction of their habitat. A report by the Australian Department of the Environment and Energy suggests that many species could be practically extinct as almost all of the area their populations are found in has been burnt.

Millions in donations to help fight the bushfires have been pledged by celebrities and big businesses. Marvel star, Chris Hemsworth and his family pledged $1,000,000 (€901,885) towards helping fight the fires. Others like Elton John, Nicole Kidman and Selena Gomez have pledged donations and singer Lizzo even took time out of her Australian tour to help pack hampers at a Melbourne food bank.

Luxury group Kering, which owns big fashion brands like Gucci, Balenciaga and Saint Laurent, also donated A$1,000,000 (€617,782). Amazon's Jeff Bezos pledged the same amount but the donation was called "insulting" as this was supposedly less than he made every 5 minutes in 2018.

Already eco-friendly businesses are helping out too. Tree planting search engine, Ecosia, has announced that on the 23rd of January, they will be donating the 100% of the money made from web searches to a local NGO called ReForest Now.

CEO of Ecosia, Christian Kroll said in a press release that “ direct action must now be taken to limit the effects of this man-made, ecological disaster” to combat these “unprecedented fires”.

The area of New South Wales where Ecosia will be focusing their efforts is a semi-tropical rainforest rich in biodiversity. There used to be 75,000 hectares of this habitat now only 800 remains thanks to the effect of the logging as well as the wildfires. Species of trees and plants in this dwindling environment provide a home for animals like the Richmond Birdwing Butterfly and the Pink Underwing Moth.

In an interview with Ecosia, co-founder and president of ReForest Now, Maximo Bottaro, explained how reforestation would help repair the damaged ecosystem. According to Bottaro, parts of the rainforest have dried out due to low rainfall in the last year making them vulnerable to fire when they wouldn't have been before.

“There are ancient trees there that are at least 300 years old and some of those trees burnt. That’s rainforest,” he said, “it shouldn’t be burning. Or even if it does burn, it should happen very infrequently.”

The search engine will announce just how many trees it will be planting on Friday the 24th of January.