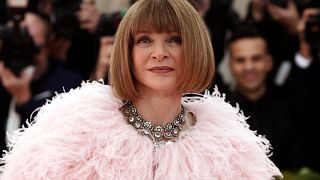 Vogue magazine’s iconic Editor-in-Chief, Anna Wintour, addressed the pressing issue of sustainability in fashion, at a conference yesterday in Greece.

The editor appeared on stage in Athens, at the Vogue Greece ‘Change Makers’ event on Wednesday, where she spoke about the importance of caring for our clothes. Calling out the throwaway culture so intrinsic in fashion, she advocated for a greener industry and even admitted fashion was “a little bit late in the game” when it comes to diversity and inclusivity.

Wintour spoke to Reuters in an interview following the conference, saying “I think for all of us it means an attention more on craft, on creativity, and less on the idea of clothes that are instantly disposable, things that you will throw away just after one reading.”

She went on to emphasise the value of clothes and the importance of making them last.

“[It’s about] valuing the clothes that you own and wearing them again and again, and maybe giving them on to your daughter, or son, whatever the case may be.”

The Greek conference focused around an array of ethical issues, separated into four parts throughout the day. Themes covered included sustainability in fashion, inclusivity in fashion, female empowerment and the role of Vogue in the future of fashion.

The event was led by Vogue Greece Editor, 29-year-old Thaleia Karafyllidou, the youngest print editor-in-chief for Vogue yet. On speaking about her inspiration for Change Makers, Karafyllidou said:

“We have to change the way we’re thinking. We have to change. I started speaking to inspiring women from all over the world and listening to their stories, their ideas of how we can reshape the fashion industry and build a more sustainable tomorrow. Slowly, this idea began to take the form of an event, an event that will make us rethink the way we see fashion.”