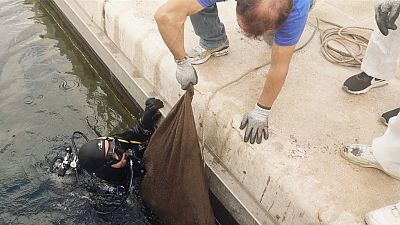 Every year, volunteers gather to clean up some of the mess. Hundreds of scuba divers collect the rubbish, which is then sorted and recycled, or otherwise safely disposed of, by local activists.

“We find a lot of scooters, railings, cans, bottles,” says Angie Espinel Cañon, a volunteer with Team 13. “The goal isn’t just to clean up, it’s also to raise awareness.”

“Last year, we recovered 91m3 of waste,” says Isabelle Poitou, another volunteer from the Merterre Association. “The year before it was 131m3, so that’s a decrease of 40m3. This year, judging from what I can see and my experience, I’d say it’s less again."

We find a lot of scooters, railings, cans and bottles. The goal isn’t just to clean up, it’s also to raise awareness.

With smurfs for mascots, the event is a part of the "EU Beach Cleanup" campaign - helping to raise awareness of the European response to the marine pollution problem. One of the divers is Alain Dumort — the EU’s representative in Marseille.

“Some waste is potentially recyclable,” says Dumort. “But unfortunately not single-use objects, which go straight in the bin. That's why from 2021 the EU will be banning all this kind of single-use utensils — plates, stirrers, cotton buds, and so on - all the things you frequently find on beaches will be banned.”

An important aspect of the campaign is public outreach. Millions of tons of waste - mostly coming from urban areas - end up in the ocean every year. It’s been calculated that on every square mile of ocean, thousands of pieces of rubbish are floating.

“The figures show that 80% of marine litter originates on land,” explains Olivier Bianchimani, the director of Septentrion Environnement. “It's either washed away by rivers or discarded directly into the sea. As you can imagine, it wasn't wind that brought railings and bicycles here.”

At over 70 beach cleanup events organised this year by the EU and the UN, almost 40 000 participants collected around 850 tons of waste — from Cambodia to Haiti - and Argentina to Norway.

The figures show that 80% of marine litter originates on land.

“This needs to be seen in a much broader context,” says Dumort. “Otherwise this would be a local event, and you’d be asking what's Europe got to do with it. Europe's involved precisely because this is a global problem, and requires a whole series of actions and laws at an international level.”

The European Union is leading the global fight against marine litter. Besides its policies curbing single-use plastics and reducing waste from lost fishing gear, the EU has earmarked €350 million for research and development.

Mini-catamaran scoops debris from the water

One of the EU-supported technologies is WasteShark, developed in Rotterdam. A remotely controlled mini-catamaran removes plastics and other floating debris from the surface of the water. Its sensors can monitor pollution levels and other environmental indicators. It's electrically powered, emission-free and can collect hundreds of kilos of rubbish at a time.

“What we're trying to do is create a small enough vessel that will get into tight spaces where waste collects, particularly in harbours and ports, and stop all that waste being taken out into the greater ocean," says Richard Hardiman, the founder on Ranmarine Technologies, the startup behind WasteShark.

The basic function of the WasteShark is very simple. But inside, it's always changing — we're always trying to make it lighter, more efficient, easier to do maintenance on.

Ranmarine already has customers in several countries. Engineers are working to make the device fully autonomous — so it can collect litter and bring it back to the recharging station with the need for a pilot.

“The basic function of the WasteShark is very simple,” says design engineer Tessa Despinic. “It just swims around and collects trash from the surface. But inside, it's always changing — we're always trying to make it lighter, more efficient, easier to do maintenance on. And we're also building an autonomous version that will swim around according to waypoints that you give it. So we're always working on that and making it better."

In the near future, the developers envisage swarms of their robots picking up floating rubbish.

“I have a vision in my head that keeps me going,” says Hardiman. “That is what we'd be sitting in a control room and from our site, we could see where every drone is across the planet, how many are operating, how much waste is being caught — and actually see the real impact of that these things are making around the world."

Technical solutions and clean-up campaigns are important. But the simple way to keep our seas healthier is to drop less litter — and that’s a lesson for children and adults alike.