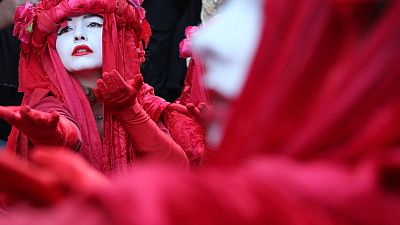 As part of ongoing action protesting the British Fashion Council's refusal to cancel London Fashion Week, Extinction Rebellion held a funeral for fashion processing down the Strand in central London.

Extinction Rebellion protesters gather in Trafalgar Square before the procession.

The processing activists dressed in black and covered their faces as they held a 'funeral' for fashion.

Amongst the activists dressed in black, Extinction Rebellion's distinctive Red Brigade stood out.

The action forms part of the groups continued protest against London Fashion Week.

The group are calling for an end to the twice yearly fashion trade show as they say it promotes consumerism.

Protesters carried a symbolic coffin down the Strand whilst a band played funeral marches in the background.

Spokespeople Sara Arnold and Bel Jacobs made speeches once the procession reached its final destination outside 180 Strand.