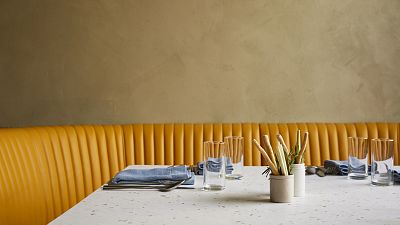 CUB in Hoxton is the newest addition to the Mr Lyan portfolio, a collection of cocktail bars that explore sustainable solutions within the drinks industry and champion a minimum waste concept. When founder Ryan Chetiyawardana opened the first location, White Lyan, in London in 2013, it was the only bar in the world to avoid using perishables (like fruit and ice) in its menu.

Mr Lyan soon established a loyal following and the group expanded quickly. Its most famous bar is arguably the newly rebranded Lyaness in the Mondrian Hotel in London and it’s set to open a further three bars in 2019 including locations in Amsterdam and Washington, DC.

Each space stays true to Chetiyawardana’s initial goal: to produce high-quality recipes that consider the environment and to produce as little waste as possible.

Luxurious food in a chic setting

In an interesting turn of events, East London’s CUB restaurant/bar focuses as much on food as it does on drinks. It challenges traditional dining experiences by offering a luxurious tasting menu in a contemporary-cool setting.

“We offer a set menu but we don’t serve it in a typical ‘white table cloth’ environment,” says restaurant manager Fernando Monzón. “We want to prove that this kind of elevated dining experience can feel modern.”

Positioned on Hoxton Street, CUB is inconspicuous from the outside and charming on the inside. Step through the grey front door and you feel like you’ve been let in on a well-kept secret - it looks like the kind of place you’d find down one of Amsterdam’s cobbled streets. Its aesthetic is considered yet effortless in a way that makes you feel immediately at ease.

Mustard-yellow leather booths face the bar and line a slim walkway, and there’s a cosy area of additional tables at the back. It’s intimate but not so small that there’s no atmosphere and its size allows for the experts behind the menu to dedicate time to each table.

When it comes to food, there’s a focus on plant-based ingredients and dishes are often vegan-friendly. “It’s not something that we want to shout about too much,” says Monzón. “There can be a sense of exclusivity about plant-based dining but we’re excited to introduce everyone to our approach, non-vegans included.”

Ingredients are seasonal and, where possible, locally sourced. There are two versions of the menu; one which offers the complete experience and a shorter alternative designed for guests with less time and a smaller appetite. The long version boasts six small plates and a generous array of cocktails. Dishes are updated sporadically, meaning the menu is completely revamped every six to eight weeks.

“Flavours are sourced from the earth,” he says. “We talk guests through every dish as we serve them to explain how it has been put together and what’s inside it, but we’re careful not to bombard people with too much information. We could talk about food forever but we want it to be a relaxed and enjoyable experience for everyone.”

Service is fluid and drinks aren’t paired with specific dishes - that would be far too formal. Instead, the expert bartender delivers his creations once they have been perfected. Alcohol isn’t the main feature here. Instead, he builds recipes around the earth’s flavours to ensure guests who don’t drink get the same experience as those who do.

There’s clearly an appetite for this kind of concept in East London and loyal customers revisit every three to four weeks. The founders chose the location well, it seems, initially landing on Hoxton for its inhabitants forward-thinking attitude and openness to experimental dining. Next, Mr Lyan has its sights set on a restaurant where food is of primary focus. “CUB has proven that the Mr Lyan concept works for food and we want to explore this idea,” says Monzón. “I’m excited to see how the business expands over the next few years.”

A new take on luxury dining, CUB is relaxed yet confident in its approach. It’s the kind of place that feels wonderfully special to eat in but that you’d also be comfortable heading to straight after a day spent browsing the area’s quirky concept stores. With sustainability at its core but atmosphere and aesthetic sharing equal emphasis, it’s appealing on multiple levels. We’d recommend a visit if not to try the delicious combination of flavours then to explore what luxury dining might look like in London’s future.