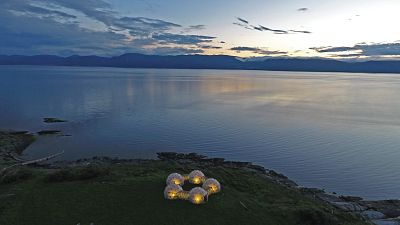 Michael Pinsky is one of the foremost European artists working right now who is looking at landscapes and the environment head-on. He asks questions about how we pollute and litter our cities and draws our attention to the beauty and tragedy of nature and the world around us. He has exhibited at the Centre for Contemporary Creation in Tours, Tate Britain and Rotterdam's International Architecture Biennial. He also curated an art show at the old Belval Steel Works in Luxembourg, which is currently being reclaimed and redeveloped.

Some of Pinsky's projects include dredged up detritus from the Canal Ourcq in Paris being illuminated, and a cluster of urban lights in Cambridge, and also a super series of decorated tiles in Chengdu, China.

His latest work is Pollution Pods – a series of domes containing the air of the cities of London, Beijing, New Delhi, Sao Paulo, and the island of Tautra in Norway. Pollution Pods have popped up in London, Trondheim in Norway, at the TED conference in Vancouver, and will be making more stops soon.

Here, Michael Pinsky talks about art and the environment.

Tell us about your early art?

“At college I was interested in British land art. I liked the idea of working out of the studio, being able to walk and working directly with the landscape.”

And how did you come to Pollution Pods?

“I was asked by a group based in Norway to create an artwork that would attempt to change people’s perception of climate change. One thing that came out in their findings was that people don’t change their behaviour unless an issue affects their everyday life. I thought about how pollution affects my everyday life and even though pollution doesn’t directly contribute greatly to global warming, the causes of pollution and global warming overlap enormously.”

“Yes, I campaigned against nuclear power and was a keen cyclist when I was in primary school.”

Related | **Winter is coming: 5 scenes in Game of Thrones that reflect climate change **

What can Pollution Pods tell us or teach us?

“This installation doesn’t teach us anything, it just allows us to step into the shoes of other people who live in some of the most polluted cities of the world. It’s more a question of raising our empathy for other people.”

Can we stop pollution?

“Yes, in places like London it would be easy, just stop using the combustion engine. In other cities the issues are more complex but can be dealt with.”

Do you think artists can or should be engaging with issues?

“Yes, I think people involved in culture should engage with critical issues; finally changing perceptions and behaviour needs a change of culture.”

Can art improve the world or does it just reflect it?

“Art can do both. Some of my projects have both raised awareness and attempted to deal with the actual problem. With a project called ‘Breaking the Surface’ I pulled out all the objects that had been thrown into an inland port and then presented them on the surface of the water. Once the project was over I brought these objects to a junkyard, so the port was again in a pristine condition.”

What are you working on next?

“I am just in the process of making a huge circular bench for a small seaside town in Dorset. It is a place where a huge number of bikers congregate, so I was interested in creating something that both celebrated their love of motorbikes and allowed other visitors to sit in a area free of bikes. It's part of my ongoing interest in promoting any alternative modes of transport to the private car. I did this TEDxtalk which outlines my position as an artist in relation to private car ownership.”