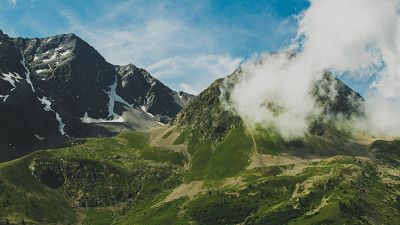 From full-service refuges to minimalist structures, Europe offers a huge range of mountain huts in all shapes and sizes. However, they do all have one thing in common - the breathtaking views. Whether looking for a place to rest your weary head on a multi-day trek, or as a destination in itself, a good mountain hut provides the chance to relax and reflect while offering protection from the ravages of the mountains. Here is a selection of just some of the spectacular spots around Europe.

Resembling a plane fuselage the Gervasutti may look more at home on a film set than in the mountains, however the sleek and futuristic structure has a commanding presence - jutting out into the abyss at 2835 metres on a rocky outcrop on the Fréboudze glacier in Courmayer in northwest Italy. From where it sits the Gervasutti refuge looks upon the imposing East face of the Grandes Jorasses in the Mont Blanc massif.

Built by LeapFactory (Living, Ecological, Alpine Pod), which specialises in prefab structures for extreme environments that have minimal environmental impact, and commissioned by the Italian Alpine Club, the structure aimed to revolutionise the way alpine huts were designed and constructed and was airlifted by helicopter in parts and to the remote location.

Nestled among the rugged and windswept hills of the Cairngorms National Park is Culardoch Shieling, a rough and ready bothy so in keeping with its surroundings that one might be forgiven to mistaking it for another part of the rolling hills in which it sits - at the foot of the munro Culardoch.

However, inside Culardoch Shieling takes on a whole different complexion. Designed by architecture firm Moxon, with offices in West London and Aberdeenshire, the interior of the hut - in complete contrast to its harsh surroundings - provides a minimalist feel. The company says the hut combines the romanticism of a Scottish hill walkers hut or farmer’s “shieling” with the “cleanliness of 20th century modernists such as Aalto”.

Perched high in the Valais in Southern Switzerland the Bertol hut looks out over the imposing vista of the Dent Blanche, Dent D’Herens and the mighty Matterhorn. Situated along the Haute Route between Chamonix and Zermatt the Bertol Hut is located at 3311 metres - high above the resort of Arolla. Opened in 1889, the Bertol hut has seen many expansions since its initial construction and now has five dormitories set our over four stories each with 16 beds, an 80 seat dining room and panoramic views of the surrounding mountains.

Under the North face of Mont Blanc, a jagged spike juts out from the surrounding rock and ice. Upon this rocky outcrop the Refuges des Grand Mulets perches precariously. At just over 3000m the refuge, situated along the historic route of Mont Blanc the hut and owned by the French Alpine Club, offers spectacular views of the surrounding mountain region. Perfectly located to offer adventurous mountaineers a spot from which to launch an attack on the summit of Mont Blanc, the Refuges des Grand Mulets has enough space from 68 guests and is open between late march and late July.

Lišanjski vrh in the Dinaric Alps: an hexagonal red shelter

Constructed and operated by the Dinarid Mountain Association the bare-bones Lišanjski vrh offers little in the way of comfort but a lot in the way of views. The hexagonal red shelter stands in stark contrast to its surroundings in the Dinaric Alps. Inside is a simple affair of fixed benches and moulded hooks from which sleeping nets can be hung that can, according to the Dinarid Mountain Association, accommodate 10 guests. Located at 1,794m, near the state border between Croatia and Bosnia and Herzegovina, Lišanjski vrh offers excellent views of, and access to, the surrounding Dinaric Massif.

Since 1939 the tiny Þjófadalir hut has stood at the foot of Rauðkollur in central Iceland, with sweeping views across the Þjófadalir valley. Located at 610m, many interesting hikes are accessible in the surrounding Kjölur highlands, including one to the edge of the Langjökul glacier.

The hut, operated by the Iceland Touring Association, FI - through which it can be booked - accommodates 11 and while somewhat basic, does contain a small kitchen and utensils as well as an outhouse, although water will need to be fetched from a nearby stream.