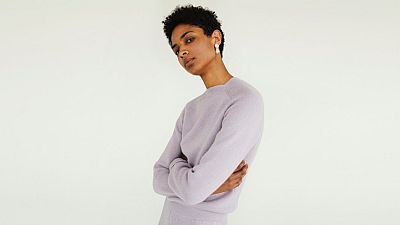 When Veronica D’Souza, co-founder of Carcel, a slow fashion label that trains and employs female prisoners in Peru and Thailand, found herself inside Nairobi’s women’s prison, she had no idea how much the experience would impact on her life.

At the time, the Danish social entrepreneur was working on her business Ruby Cup, an initiative promoting menstrual health in developing countries with its sustainable silicone cup alternative to pads and tampons.

Having no preconceptions of the women’s prison system, D’Souza was struck by the “village-like” atmosphere inside. Talking over the phone from her headquarters in Copenhagen, she explains that the prisoners were “ordinary women, many of them mothers who ended up committing poverty-related crimes such as drug trafficking or theft to support their families.”

Watching the women engage in sewing, knitting or crocheting, D’Souza became aware of the vital psychological benefits of these daily activities. “The worst thing that can happen in prison is to do nothing,” she says. “You get extremely depressed.”

She observed, though, that there was no system in place for the women to turn their crafts into income. “From a production point of view, there was full output, but these women didn’t have anywhere to sell their products, and when they got out, they were further impoverished, which felt wasteful,” says D’Souza.

Noticing an opportunity to turn “forgotten resources into dignifying jobs”, the entrepreneur travelled home to Copenhagen and began developing the idea. Finding premium materials indigenous to Nairobi proved difficult – “almost everything there was imported” – but D’Souza and her business partner Louise van Hauen began mapping out locations that were home to the finest materials in the world, and the highest rates of poverty-related crime.

Fast forward to today and the fruits of that labour is Carcel, a Danish online brand employing women prisoners in Cusco, Peru and Chiang Mai, Thailand, where the main cause of female incarceration is drug trafficking.

Employees work a flexible structure of between four and five hours per day, five days a week, overseen by Carcel’s onsite production managers, and receive a fair salary in line with the ILO national living wage. Employment is freely chosen, working conditions are safe and hygienic, and salaries are based on cost of living – so, the day rate of a skilled knitter in Peru or top seamstress in Thailand will be paid as minimum.

The opportunity to earn a fair living, which can be saved up and utilised to support family members on the outside, and hone new technical skills, is a means of breaking the cycle of poverty. D’Souza comments that she has seen “huge differences in terms of self-esteem” amongst employees.

Flexible working hours are designed to bring a manageable structure to each employee’s week. “It’s vital to understand that we’re a different eco-system – this is a prison, not a factory, and the women can be under a lot of stress emotionally,” says D’Souza.

“Every site is different, so we have to be hands on and communication is key,” she continues. “Working with a maximum security prison means that the women have long sentences, so it’s important to focus on skills training and how this job can enable them to support their families financially.”

Carcel’s Cusco-made line is comprised of sleek, minimalist separates crafted from baby alpaca wool, a material that is soft yet strong and naturally thermal regulating. The Chiang Mai collection, made from locally-made 100% silk, launched at Copenhagen Fashion Week in February and is similarly wearable, featuring casual silhouettes and feminine skirts and dresses adorned with embroidered details. Both lines embrace Danish fashion values, designed to endure, inspire and transcend the seasonal wheel. A label inside each piece is stitched with the name of its maker.

“It’s such a wonderful detail that makes me happy every time,” says D’Souza. “One of the big movements in the fashion world right now is transparency and there’s something extremely strong in having a signature that shows who made what you’re wearing. We’re very proud of our producers and know them personally, both in Peru and Thailand.”

D’Souza explains that approaching the label from a social, rather than fashion, perspective has helped Carcel innovate around the supply chain. “We haven’t run a fashion label before. That’s a good thing, because we have nothing to compare it with,” she says. “There’s no mothership of a brand that needs turning around – we can start from scratch, redesign the model, prove that it works and create something for the future.”

The brand operates online, producing small batches using a pre-order system. D’Souza is passionate about eliminating waste, and sees the seasonal wheel as being intrinsic to the “misalignment between supply and demand” in the fashion industry. “If you are going to put things out into the world, it’s important to use quality materials and to only produce what you sell,” she says.

D’Souza believes that, “Once we have the technology needed to track where a product is made, and the value for the producers in that supply chain, it will revolutionise how we think about and make clothes.”

Her long-term vision for Carcel is to expand into a global initiative with outposts in five or six prisons around the world, each working with a different type of fine all-natural material.

In creating “a model that is impactful socially and can be an example”, D’Souza hopes to pave the way for new-gen creators and pioneers, opening up positive, solution-oriented conversations about how we can create a more sustainable fashion future.