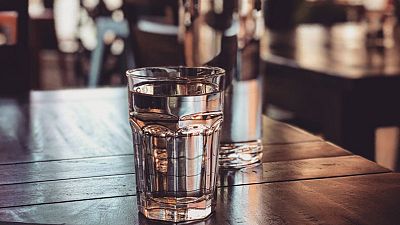 Did you know that you can't get tap water in most Belgian restaurants? It has been given freely to clientele in the US, the UK, Australia, and many other countries for decades. But restaurants here are still loathe to allow their customers to drink fresh tap water, favouring instead to sell millions of bottles of plastic and glass every year. Why is Belgium so hooked on bottled water - while hosting the EU headquarters, a world leader in the fight against plastic waste? And can a campaign help end the drought?

How far would you go for a glass of water? Quite some distance, is the answer for one Brussels citizen who was inspired to take action after being refused a simple glass of tap water in Le Pain Quotidien. Citing "the Greta effect" as inspiration, Londoner Sarah Ehrlich started a campaign on Facebook, calling for change. Taking matters into her own hands, she is speaking to café and restaurant owners individually, asking them to start serving tap water now – rather than waiting for legislation.

Simply titled “Free Tap Water in Belgian Restaurants,” the campaign is proving successful, with café chains such as Exki and Pulp agreeing to change their ways since it began just two months ago. Almost 8,000 followers on Facebook shows the appetite for such an initiative. It has not gone unnoticed by the Belgian media either, attracting attention from the national press and featuring on a number of TV shows in recent weeks.

“The trigger for the campaign was having lunch with my friend from England in Bruges. We went to Le Pain Quotidien and had just spent a considerable amount on her birthday lunch and coffee. When she asked for a glass of tap water, she looked so astonished at the negative reply. I had already been thinking of a campaign, but her look was certainly the impetus needed for it!” says Ehrlich.

“After fifteen years of living in Brussels it was an ecological motive more than financial. If you have decent tap water, why not be able to drink it, and stop unnecessary recycling?”

Ehrlich admits the response to the campaign has been overwhelming, with nine volunteers joining her within a month. They work on updating the page, contacting restaurants, answering comments and giving media interviews in French and Dutch. “What is proving incredibly popular is our Google Map which shows the places that do already serve free tap water - 302 restaurants as of today. It is, however, a 'glass half empty' situation as the vast majority don’t, but I do think we are on the cusp of a tap water revolution here,” she says.

Every day the campaign champions new tap water converts in a "name and fame" approach on its Facebook page. A template letter also exists, in three languages, for people to send to restaurants themselves, asking them to consider a change. The page is also home to pictures of Belgian residents on holiday around the world, proudly drinking tap water from Japan to New York and sharing the evidence.

The Shape of Water

Ehrlich is adamant that both plastic and glass cost the environment, pointing out the factors of transport, energy, and water required to clean glass. “The main point is that bottled water is essentially an invention and a multi-million euro industry in Belgium, and it probably will be for some time yet," she says.

"This campaign is all about choice. I am not judging anyone who prefers bottled water, and of course I would never tell restaurants to stop selling bottled water. But if one tries to commit to a lifestyle that uses less single-use plastic, and a lower carbon footprint, it's beyond ironic that I can't do that in the heart of the EU, where thousands of people are working with environmental law to save our planet.”

“They’re here protecting Europe - and yet when those people go around the corner for their lunch break they’re like the rest of us, forced to buy a little plastic bottle, more single use plastic. Why can’t we see a change here right in front of us?" she says.

Ehrlich is quick to say that while she may have got the ball rolling, this campaign is nothing if not a team effort. The mixed spread of nationalities among the volunteers highlights the multiculturality of Brussels, with the group made up of four Belgians, three French, a Croatian and an Israeli.

Axelle Basselet, who grew up in France near the Belgian border, speaks about the difference in habits just three kilometres apart. “It’s been 30 years I’ve known about this - when you go to Belgium, you have to buy water. In France you can ask for tap water and it’s mandatory to give it," she says.

Israeli Orit Yaron is confident that change is coming. “This is going to happen. Because the moment is ripe, the public is ready for a change, and I think the restaurants will find it difficult, as I did, to stay on the sidelines when this is all happening.”

"I will order more food, I will stay for dessert and I will come back”

Yaron believes that the project is all about generosity, starting with the environment. “But it’s also a generosity between ourselves as human beings. Generosity from you as the restaurateur will bring out my generosity and my kindness. I will order more food, I will stay for dessert and I will come back,” she says.

“The more people share the page, the more the campaign has more prominence and the more people simply ask for a glass of tap water - if everybody starts doing it, restaurants will listen,” says Ehrlich.

Ehrlich also addresses the idea that Belgian tap water is simply not safe to drink.

“It’s almost like an urban myth, you mustn’t drink Belgian tap water,” she says. “It’s a subtle way of conditioning a public. By insisting that you can only drink bottled water, there is also a signal sent that there is something wrong with the tap water, and that is what many Belgians have been led to believe," she says.

"If you do politely ask a restaurant manager for a glass of tap water, who doesn’t just give you a stern look, they will either explain that it’s the "Belgian tradition" to only serve bottled water, or they will say it’s “non-potable”. Of course, they will happily serve you a cup of coffee with the same water. There are just too many hypocrisies, and it’s time to really re-examine them.”

The non-potable claim is also refuted by Eric Chauveheid, Water Quality Manager at Vivaqua. “In Belgium we intensively and regularly control the drinking water. We control already the water in the ground at the source, we follow the quality of the water, and when it is delivered to the consumer we control it again - so we make several controls at several steps of the process,” he says.

He speaks to concerns about calcaire (lime) or hard water. “The effect of lime on machines and on human beings is not the same at all. You can have trouble with machines if you heat water above 70 degrees. But people should not compare washing machines with the body – it's completely different. Hard water is not harmful to drink,” he says.

It’s clearly a very emotive subject for Belgian establishment owners. The Fédération Horeca Bruxelles is strongly against the initiative, citing steep social charges which already cost the restaurateur when hiring staff. Federation President Yves Roque acknowledges that customs vary in different countries, but states that here in Belgium, water represents hundreds of millions of euro for the Horeca sector every year.

“You can’t oblige the waiters to work for free”

He also mentions workers' rights. “Here, from the total bill, the worker gets 16 per cent. When we give free water the worker doesn’t get anything. So that means that every time they give you a glass of water, they are working for free,” he says.

“There is a carafe, he has to put the water in it, this bottle will be served, it will be taken away, it’ll be washed, dried, stocked, and then afterwards there is a glass, so the glass will have to be served, taken away, washed, et cetera. You can’t make me, if I’m a worker, serve you something for free. I’m not there to be a volunteer.”

Roque points out that in many restaurants, recyclable glass bottles are sold, and not plastic ones. He’s also not sold himself on the taste of tap water. “When you give water from the tap, the water is full of calcaire, it has chlorine, you’re drinking chlorine. It has a taste, and it can be warm from the pipes. It’s not the same thing to drink spring water - which is good - and to drink tap water. It’s not the same.”

“Me, I never drink tap water. Never. If our machines can’t work with this water, how can my body?” says Roque.

The owners at Chouconut patisserie are also staunch defenders of the humble glass of water, having served it since they opened their tea rooms. “We’re from France, so for us it’s normal to have a glass of tap water free,” says owner Giovanni Malecot. Co-proprietor Baptiste Mandon concurs. “We’re happy to offer the customer some free water…it doesn’t cost anything,” he says.

They dismiss the idea that it may cost restaurants their livelihood. “It’s nothing! Oh come on, nothing,” says Malecot. “If someone comes in my café and she buys a coffee I’m happy to serve water, it’s the minimum we can do. And I don’t like to serve plastic, I prefer to wash the glass for ten seconds,” he says.

Water, water everywhere, nor any drop to drink

Belgian writer Hugo Poliart also recently weighed in on the issue, when he wrote about the Mannekin Pis wasting up to 2,500 litres of drinking water per day - while Brussels restaurants still served none. His post went viral. “I saw that the campaign used my post and I thought it was great,” he said. “But actually it’s not the first time I write about this, that very strange thing in Belgium where you have to pay for water.”

Poliart was inspired by a trip to Australia in the nineties - getting free tap water wherever he went. "Here, I noticed a few years ago a very cool place for brunch which is called Peck, that you can have tap water, for free. And it’s always packed,” he says.

“One point on which I can understand them, is the way that they are overwhelmed with taxes can be difficult for some of them to run a business. But I think generally the fact of not giving away tap water in Belgium is part of what I call the “no-service” mentality that we have. But it’s changing - especially with the younger generation, they have travelled, and so probably they have a better sense of what service is,” he says.

Is change afoot in Brussels? Ehrlich is hoping for a firm “eau yes”.

“We just want a change today, literally today. It is that easy, restaurants could just make that change overnight, you can say - we have the glasses, we have a tap, we’ll give you the choice!"

“We can do without the free bread and butter,” she says. “We just want Mother Nature’s glass of tap water.”