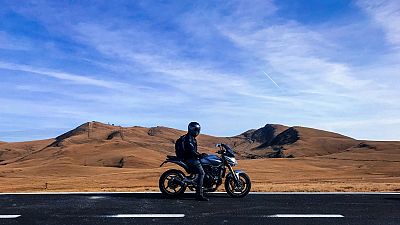 Electric cars are becoming part of the everyday motoring landscape, and so are EV motorcycles and scooters. The reason electric power is ideal for these jam-busters is most of these vehicles are used for shorter commuter journeys, often in cities and built-up environments where pollution is at its worst. Light weight also means a scooter or motorcycle is perfectly designed to make the most of a battery-powered set-up when it comes to range and quick re-charging.

There are plenty of options out there for those who want to go down the two-wheel EV route and something to suit every rider’s tastes. One of the pioneers of the EV motorcycle is Zero, a US-based firm, that started out producing bikes for commuters as an alternative to a lightweight 125- or 250cc machine. Now, Zero offers the FX, SR and DSR lines so you have the pick of that original compact off-road style commuting bike, a mid-size naked street bike in the SR and something with an adventure flavour with the DSR.

Just as importantly as the variety in its range, Zero’s bikes have a claimed range of up to 359km (224 miles). That’s more than most petrol-fuelled motorcycles can manage on a brimmed tank and there’s an equally compelling reason for choosing a Zero or other EV two-wheeler for city riding: instant power.

Unlike petrol-engined motorcycles where you usually need a fistful of revs to get going, battery-powered two-wheelers enjoy almost instant torque the moment you twist the throttle. This is because electric motors give full power the moment they start turning instead of having to build to a peak. It makes getting away from traffic lights and filtering through congested streets very easy, especially with the smooth delivery of most EV motorcycles.

On the open road, you will sacrifice some range for greater speed, but that’s the case with any fuel source. Vitally, the latest breed of EV motorcycles come with plenty of performance and the handling to match. Zero’s SR/F is easily a match for the best mid-sized naked machines, such as the Yamaha MT-07 or Suzuki GSX-S750. However, the Zero’s considerably higher price at €23,090 means you’ll need to use it a lot to offset the price over its petrol-engined rivals.

However, motorcycling is rarely about simple numbers and much more about experiences, and EVs offer a different experience in almost every sector. The Energica Ego process beyond doubt that battery power and superbike dynamics go together very well. It looks sensational and this Italian-built bike has the handling, brakes and specification to tempt many away from similarly rapid machines costing about the same €23,000.

For a very different take, even Harley-Davidson is getting in on the EV act with its LiveWire that borrows its style from the company’s flat trackers of the 1970s. Costing from €30,000, it’s expensive but has all of the traditional Harley virtues coupled to a 110-mile emissions-free range and a turn of speed few would expect of this style of bike.

Scooters with a removable battery pack

That zero emissions point will not be missed by many motorcyclists as more cities introduce Low Emissions Zones. When two-wheelers are already the ideal form of transport to beat congestions, a bike with no tailpipe pollution is even more attractive and the cost-savings will also help to offset any additional upfront purchase price over a petrol-fuelled motorcycle.

And it’s not all about motorcycles. There are plenty of EV scooters out there to choose from, including the classically styled Vespa Eletrrica. Looking every inch the dolce vita Vespa, it has a 100km (60-mile) range and takes four hours to fully charge, so you can plug it in while at work ready to ride home in the evening.

A different take on charging comes from Kymco with its Many 110 that it has developed in partnership with Ionex. This design has a core battery permanently fitted so the scooter can always be used, but it also comes with a removable battery pack that can be charged at an Ionex station while you continue to ride.

Treading the middle ground between lightweight scooters and motorcycles is BMW C-Evolution maxi-scooter. It costs around €13,000 and has a range of 100km (62 miles), as well as a 47bhp motor for performance that’s on a par with the best super-scooters in the class. Crucially, used values of this machine and other EV two-wheelers are bearing up well due to popularity, which means the cost of ownership is very similar to a petrol alternative.

If that still doesn’t convince you, there are cheaper EV scooters such as the NIU M+ from just €2000 with a 130km (80-mile) range and 3.5-hour charging time. Like many EV two-wheelers, this includes a plug-in vehicle grant in several European countries that is deducted from the purchase price, offering a further enticement to switch to electric power to get your two-wheeled thrills.