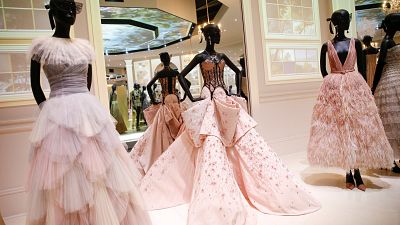 After the smashing success of its Alexander McQueen show, London's Victoria and Albert Museum is set to draw big crowds again with a major new fashion exhibit - this time on Christian Dior.

Billed as the largest and most comprehensive museum display ever staged in Britain on the revered French fashion house, the exhibit, traces the influence of Dior over seven decades and showcases dozens of spectacular couture gowns.

Dozens of handmade gowns in sumptuous silks, feathers and crystals are displayed in a mirrored room, complete with lighting effects, simulating sparkling constellations and showers of gold dust.

The exhibit is based on a 2017 Dior show in Paris, but it's expanded with a new section devoted to Dior's fascination with British royalty and aristocracy.

Walking through the exhibition makes it easy to follow how the house evolved under artistic directors through the years, from the wildly eccentric designs of John Galliano to those of present-day director Maria Grazia Chiuri, the first woman to helm the brand.

Click on the video above to take a sneak peek at the exhibition.