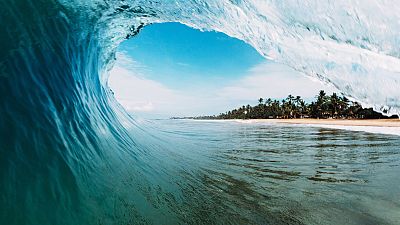 There are waves. There are big waves. Then there are monster waves, so huge – up to 30m in height – that no human should contemplate taking them on in an ocean-going vessel, let alone try to ride one on a surfboard.

But for true lovers of nature’s extremes, from mountains to deserts, the ocean deep to outer space, the phrase ‘because it’s there’ offers ample incentive to go out and tame whatever ‘it’ may be.

When they do, amid the crashing noise, the overwhelming power, the sheer violence, that’s when they find inner peace.

“In the barrel of a giant wave, you can really feel and hear your heartbeat,” says big wave surf legend Garrett McNamara. “Sometimes it’s the most violent storm, while at others it goes silent. You spend your time working to get back out, yet you don’t want to leave because it just feels beautiful. It’s like being in the womb. When you do make it out, all you want to do is get back in…”

Movie lovers will recognise this quest for the ultimate wave from Hollywood classics like Point Break. Back in the real world, the Holy Grail for big wave surfers is Nazaré in Portugal, a geographical anomaly where breakers reach record heights thanks to an underwater canyon that creates interference between the incoming swell waves.

That’s where you’ll find the world’s big wave addicts, many of whom share plenty of similarities with their fictional counterparts, not least a spiritual approach to their true calling. America’s McNamara is no exception.

“Before I leave to get a really big wave, I bend over and squeeze out every bit of stale oxygen,” he smiles. “Then I look at the tallest tree, the mountains, the ocean and the universe, attract it and breathe it all in. I do all this three times, then I open my eyes and I’ve reconnected. I’m in the Zone, manifesting and focusing on what I want.

“I learned about the breath when I took a free diving class. Then I started doing my breathe-ups as a ritual. You can apply it to all aspects of life, whether you’re going to a job interview, a speech or whatever. In my case I do it before I get in the water, but I connect with Mother Nature so much, crazy things happen: animals even come to me. If I’m on a sailboat with my family and we want a whale to come, I’ll breathe out, in then, yes, there’s a whale. It’s amazing…”

If only all maritime visitors were so welcome.

World surfing champion Mick Fanning http://mickfanning.com.au was competing at South Africa’s Jeffreys Bay in 2015 when every movie fan’s worst nightmare suddenly got very real. The fin that appeared alongside him belonged to a great white shark.

The Australian’s instant reaction, captured on live TV and since viewed 25 million times on YouTube, was to hit out and wedge his surfboard between himself and his aquatic acquaintance, which bit off his leash. By the time Fanning was picked up by a response team he’d saved himself purely because he, too, was in the Zone.

“Throughout that day I’d felt amazing,” says Fanning. “If you can get in that Zone, that’s when you’re at your best. So it was probably a blessing in disguise that this happened during an actual event and I was so centred, otherwise I might not have reacted that quickly. It felt like a good five minutes when it was really ten seconds. But I guess that’s how fast the mind works.”

This is a classic report from car crashes and other near-death experiences. When we are scrabbling for a way out of trouble, the brain is awoken from ‘tick-over’ mode by an influx of adrenalin and speeds up, as long as we avoid freezing in panic. Fanning was already at such an extreme of focus he slipped straight into the right state.

So yes, the ocean has plenty of perils. But these masters are passionate about passing on its lessons too: physical, mental and spiritual.

“When I take kids out on the water, I make sure they ride a wave,” insists McNamara. “That means they leave thinking: ‘Wow’. They’re empowered. When anyone surfs for the first time and feels at one with the power of the ocean, they’re filled with the knowledge that anything is possible…”