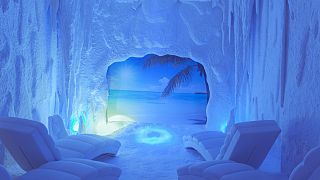 Plush white deck chairs, soft relaxing music and dim lighting... this looks like your regular spa treatment room. And it would be, if the floor and walls were not covered by a thick layer of white salt.

We are in the main relaxation room of a brand new halotherapy center in Madrid. Sometimes referred to as ‘salt therapy’ - halo is the ancient Greek word for ‘salt’ - this peculiar wellness experience is gaining fame all around Europe. The idea is to lie down comfortably whilst breathing deeply micro-particles of natural mineral salt.

The benefits of halotherapy first came to light in 1843. Polish doctor Feliks Boczkowski, worked with salt mine workers and noticed they had reduced respiratory problems and a lower probability of lung disease compared to other miners. During World War 2, a German physician called Karl Hermann Spannagel then made similar discoveries. He saw his patients' health improved after hiding from the bombs in salt underground caves. Today, salt rooms in spas try to replicate these natural wonders by spraying salt vapor into the air of a confined room.

Salt is known to have anti-bacterial and anti-inflammatory properties. However, it’s only in the last decade that studies have been conducted to rigorously assess the health benefits of halotherapy, showing mostly a relief for respiratory and skin conditions. Most of the research to date has been led by Dr. Alina Chervinskaya in St. Petersburg, Russia. Some of her work has shown that in an allergen-free environment with adequate levels of salt particles, patients with chronic respiratory diseases experienced some improvements. She suggested that 85 per cent of mild and moderate asthma cases were improved after a few sessions of halotherapy.

Studies by other groups have indicated that halotherapy could benefit conditions such as acne and psoriasis, but also mental health issues like stress and headaches, improving energy and mental alertness. However, as a recent review pointed out, most of this evidence is limited.

Scientists have investigated the benefits of halotherapy only for a small number of patients. Details regarding the conditions patients suffered from and the state they were in before halotherapy are rarely given in those studies. Information about the number and length of halotherapy sessions needed is often missing, and so is the comparison with other patients who have not tried the therapy.

While halotherapy appears to be safe, many researchers point out there is not enough evidence to prove it is entirely efficient. Some say that potential improvements could be due to placebo effect. In fact, all the doctors contacted for this piece declined to comment, due to the limited amount of evidence.

Intrigued by the concept, and by the debate surrounding halotherapy, I decided to try it and booked an early morning session at Salt Room Madrid. As I entered the main halotherapy room the salted floor cracked under my feet. I remained fully clothed, minus the shoes, as the temperature of the room was set to 20°C. Another one of their rooms feels like a hammam with steam for people who want to sweat during the experience. You are invited to meditate, or even take a nap, as there isn't much else to do besides relaxing. The experience is quite subtil as none of your senses are particularly stimulated and the room is odourless.

I was told most of the clients coming here are either elderly or young children with respiratory or skin problems as well as athletes wishing to improve their wellbeing and breath capacity before running. All in all, the place is fully booked all year round since its opening two and a half years ago.

"To see a positive effect on the health, you would have to come regularly, for more than one session. This is a complementary therapy, which people should do in combination with their medical treatments, not as a replacement. For those who don’t have any health issue, it’s more about relaxing, winding down, in a different and calming atmosphere - and we have taken great care to create a peaceful, detailed-oriented one,” says Jacinto de la Cruz, one of the owners of Salt Room Madrid.

While staying in a quiet salt cave was definitely soothing, making for an original - albeit expensive - experience for spa lovers, I have yet to see any definite effects on my physical well-being. Then again, it's hard to say after a single session and positive effects are said to appear after a few sessions.

Salt Room Madrid: You can choose from three different halotherapy rooms including a more intimate one designed for two persons, and there is also a facility for children. From 27 euros for 50 minutes. Calle Fernández de los Ríos 52 28015. www.saltroommadrid.com

London Salt Cave: One of the many operated by this company in the UK. Others are found in Liverpool, Kent and Edinburgh. 320B Earlsfield Road SW18 3EJ. From £35 (39 euros) for 1 hours (first session is free). www.saltcave.co.uk