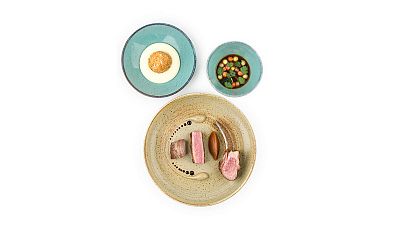 February 2018, following the arrival of chef Julien Lefebvre nine months earlier, the Cordeillan-Bages gourmet restaurant was awarded a Michelin star. In this only Relais & Châteaux Michelin star restaurant of the Médoc region, chef Lefebvre has created inspiring new menu featuring his vision of haute cuisine entwined with fresh products from the local terroir. On top, Julien Lefebvre also oversees the menu at Café Lavinal in the village of Bages, which was awarded Bib Gourmand status this year.

Growing up in Normandy, Lefebvre was inspired by the artisans of his family deeply rooted in this food-producing region where he found his calling. Trained by Frédéric Anton at the Parisian institution Le Pré Catelan***  , he pursued his prestigious career alongside Mathieu Pacaud in three of the most renowned restaurants of the City of Light: Histoires**  , Hexagone*  and Divellec*.

Prior to arriving at Cordeillan-Bages, Lefebvre spent a year meeting local producers to discover their gastronomic treasures; caviar from Aquitaine, white asparagus, strawberries and snails from Saint-Laurent-Médoc, oysters dans gambas in Saint Vivien de Médoc. This year, Julien created a new “Equilibre” menu which features dishes all inspired by the Ayurveda philosophy. In an exclusive interview, chef Lefebvre tells Living it all about it.

What is “Ayurveda” and how do you apply its philosophy to your cuisine?

"Ayurveda (from the sanskrit “ayur”: vital force; “veda”: knowledge) is a natural Indian medecin that is over two thousand years old. Its principle relies on identifying three physiological aspects - which are called "doshas" - of the body and what particular food would be beneficial for it. Depending on your dosha, some vegetables are better than others for your health."

"I built the spirit of my ayurvedic cuisine while going through personal changes in my nutrition, I started using a lot of ingredients that I found particularily beneficial. As the chef at Cordeillan-Bages, I want to raise my clients’ awareness and stress how healthy the products we use are. That's why we work on extractions, stocks, consommés, salads, and add spices such as curcuma and ginger, which are very powerful and natural anti-oxydants, or pommegranate which is extremely healthy and adds a lot of taste and crunch to our dishes. It's a matter of public health, really! You have to be aware of what and how you're eating, as well as where the products have been grown. I select the best goods so that we transform them as less as possible, we only want to sublimate it, so that the client experiences a unique meal."

How would you describe your ayurvedic cuisine?

"The ayurvedic cuisine does not include much meat. We use white fish that are low in fat, poultry that is not very caloric and green and raw vegetables. Modern nutrition has a tendency to cook vegetables, it does not use dry vegetables which is a shame because they're a very important part of what we're supposed to eat daily. I try to reintroduce them and make them look sexy, with my personal experience I can work and cook them in a certain way that makes them seem more appealing."

"Ayurveda is really a mean to determine what food corresponds best to each individual. It's "sur-mesure", but obviously it's hard to implement that individuality in the restaurant – and we're not doctors. What I really want to do is emphasise the benefits of the products we use and how we associate them together so that they're truly healthy. At the end of the meal, you realise that you've eaten well, that your dishes were well-balanced, that they were good and seasonal products, some of which were raw, that we have mixed different kinds of textures, using seeds and all sorts of ingredients that have been forgotten."

When did you start practicing Ayurveda?

"I started developping an interest for Ayurveda as my cousin moved to India in 2009. I documented myself a lot, read all kinds of books on this philosophy. But I don't want it to become a medical thing, it has to stay recreational. I'm planning on going to India this coming winter, for three weeks or so. I will try to bring back as much spices as I can, the kinds that we have a hard time getting here. I want to discover all the aspects of India, and the different kinds of influences you can find there."

"I’m also very keen on yoga. I’ve recently started initiating myself to it and took on meditation too! Therefore in August, we are hosting a “Wine and wellness” weekend, combining yoga and Ayurveda. A yogi master is going to come for a couple days at the Château and teach intuition, yoga and meditation classes to our clients. Here, we're in the heart of nature, we can reach out to different kinds of people, it has a very relaxing atmosphere to it. We want to create a sort of bubble. In the restaurant, we have already set a playlist of a Indian mantras, it brings a certain serenity and I believe the subconscious enjoys the delicacies in a different way."

Weekend Equilibre - August 3rd and 4th 2018, Château Cordeillan-Bages from 599€/person, including a standard double room and breakfast, a “body and spirit stress management” class, a seven course “Equilibre” dinner at the gourmet Cordeillan Bages* restaurant, a “living in the present” yoga session followed by an hour long bike ride and a fresh “Primeurs” lunch, and finally an “intuition, building your future” meditation class. Enquire here.