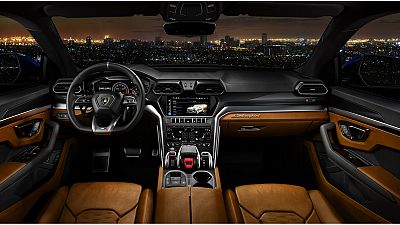 Living It joined the cream of the world's automotive journalists and influencers in Rome for the dynamic media launch of the all-new Lamborghini Urus.

The Urus is not just another luxury high-performance SUV - it's a game-changer for the legendary Italian car company, home to the Huracán and Aventador supercars.

Dubbed the first SSUV (Super Sports Utility Vehicle) it is likely to become the best-selling Lamborghini in the company's 55-year history.

Expectations are high. So high that the factory in Sant'Agata Bolognese has literally doubled in size from 80,000 to 160,000 square metres in order to accommodate the Urus production line.

In 2017 Lamborghini sold 3,815 cars. Having driven the new car (and bearing in mind that SUVs are the world's fast-growing sector), we wouldn't be surprised to see that figure double within a year or so.

Driving in the Eternal City

Now Rome isn't the best place to drive a big expensive car at the best of times (the Urus is 5112mm long and 2016mm wide) - let alone one as powerful as the latest Lambo.

Staggering though its performance is, the Urus represents much more. Overlooking the beast that was the Hummer-like Lamborghini LM002 of the late '80s, this is the most practical Lambo ever.

For the first time, a family can head off on a road trip in comfort and Lamborghini style. There's even room for the luggage (616 litres, or 1,596 litres with the rear seats folded down).

What's more, if the terrain gets tough, the Urus can cope thanks to its six driving modes. In addition to Strada (comfort), Sport (agility) and Ego (driver customised), there are three off-road settings - Neve (snow), Sabbia (sand) and Terra (general off-road).

We stayed in Strada for most of Rome’s roads, which weren’t the smoothest, though we switched to Sport in a couple of tunnels and wound down the windows. Schoolboy stuff, but there’s no better way to enjoy the Lambo’s addictive soundtrack.

There were plenty of admiring nods and waves too. After all, Lamborghini is a thoroughbred Italian automotive brand, right up there with Ferrari and Maserati.

Our introduction to the Urus then took us 40 kilometres out to the impressive Autodromo Vallelunga - a tight, technical circuit, ideal for testing the Urus at high speed.

Such is Lamborghini's trust in the car, we were allowed out on track unaccompanied in threes - the only stipulation was that we had to follow a driving professional in a Urus pace car.

Even for those with little track experience, the Urus is a very forgiving car. Following the racing lines was relatively easy thanks to the car's four-wheel drive, four-wheel steering and massive 440mm front carbon ceramic brakes - the largest on any production car.

Despite its size and weight (2.2 tonnes), the Urus is uncannily agile and defies physics. The Urus feels totally planted and the cabin is as calm as can be, even at high speed. And then there's the roar from that V8!

Things got a little more frenetic just outside the circuit perimeter where an off-road area had been specially prepared.

Off-roading Lamborghini-style took us out on a gravel and sand circuit complete with breaking point markers. More rallycross than anything, it was all about speed.

This time we had an instructor alongside, though mine spent most of his time encouraging me to bury my right foot whenever possible.

After a few laps, I swapped seats and my instructor took me on a demonstration lap. And I thought I’d gone fast. I’m just glad there was a grab handle.

Driving at speed off-road is superb fun and the Urus coped surprisingly well, but I don't think many owners will put their cars through that kind of punishment.

With its sporty looks and a sumptuous interior packed with all the latest gadgets, the Urus is both a statement and a practical daily driver. Now I just need to win the lottery...