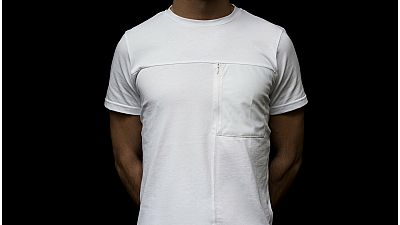 What if our clothing could play an active roll in cleaning up the environment? Italian loungewear brand Kloters wants to make this a reality with its new, crowd-funded t-shirt which can offset the pollution caused by two cars.

The Rep-Air enables its wearers to play an active part in tackling air pollution through its antibacterial pocket insert which not only absorbs unpleasant odours but also harmful toxins in the air, namely nitrogen oxides, sulphur oxides, ozone, benzene, formaldehyde, polycyclic aromatic hydrocarbons, and volatile organic compounds. These dangerous pollutants are known to lead to health issues such as tumours, leukaemia, respiratory diseases, and eye and nose irritation.

Rep-Air is unisex, available in black and white, and will retail for around €45, making it one of the simplest and most affordable ways to become an eco-hero. The special pocket insert needs to be removed before washing and ironing but will remain active for approximately one year, after which you can buy a refill.

The insert is made from an award-winning fabric known as Breath® which, up until now, has only been used in interiors and outdoor advertising banners. Now it manifests in a wholly more personable, and portable, way by being adapted into a fashion product. “We wanted to make a product that could be widely used, so we chose a t-shirt as a first vehicle for it because everyone has one in their wardrobe,” explains Kloters Co-Founder, Federico Suria.

A t-shirt that captures toxic molecules in the air

While wearing trapped, harmful gases so close to your skin may ring alarm bells, Suria assures that the technology is completely safe. “[The insert’s] core is surrounded and isolated by an antibacterial mesh that is glued onto the core. Then the insert is contained by a pocket that has cotton on the internal side and the same antibacterial mesh on the external. Therefore, RepAir does not create risks for those who wear it. Once toxic molecules are captured they stay in the core that little by little is saturated.”

The fabric technology relies on air flow going through the fabric so, while it requires no additional energy source, it will become less effective the more layers you pile on over your t-shirt. Suria has said though that they want to use Breath® in a full apparel line, from sweaters to trousers, maximising impact.

Timeless style made ethically in Italy

In addition to its air-cleansing properties, RepAir is made in Italy in a facility closely monitored for ethical practices by the brand. It’s also made from high-grade, long-lasting cotton, in a timeless style; a simple step which aligns with Kloters’ values to reduce unnecessary consumption of fashion. What’s more, they’re working with the makers of Breath® to make the insert completely recyclable.

“It is easy to imagine the impact of RepAir if even a small percentage of t-shirts sold become RepAir, especially in highly polluted cities,” Suria concludes hopefully. “We also hope that this product will create a stimulus to have other big fashion players thinking of sustainable fashion not only as a way of reducing the impact of our industry, but also as a means to make clothing an active contributor in cleaning the planet.”

Don’t miss your chance to be one of the first to own the game-changing RepAir t-shirt at the special price of €29 by signing up to be notified of their Kickstarter launching in May.