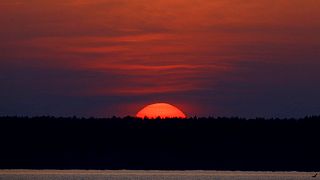 March showed contrasting temperatures across the globe. Temperatures were much above average over a large region from north-eastern Africa, across central Asia to China, but cold temperatures prevailed in Europe and Russia.

These dust events are partly the result of increased desertification from climate change and have an important impact on human health and activities.

March 2018 was colder than the average over almost all of Europe. The southwest experienced large amounts of rainfall, relieving parts of the region from previous drought conditions.