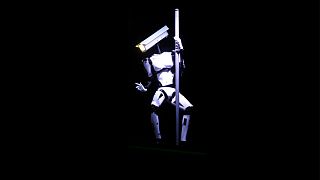 A pair of pole-dancing robots performed at the Sapphire Las Vegas Gentleman's Club during the CES 2018.

London-based artist Giles Walker made them from scrap material several years ago as “a protest about surveillance, power and voyeurism”.

"It's associated with the fact that when I was building these, all these CCTV cameras were going up in London all over and they're like kind of these mechanical kinds of peeping toms on every street corner." - explains the creator, adding that the idea was playing with this idea of voyeurism, and who has the power in that relationship; whether it’s the voyeur or the person being watched.

"If I build some pole dancers out of windscreen wiper motors and then eventually their end journey is the biggest strip joint in Las Vegas, it's been a really strange journey. But I think it kind of works for me in my head", he explained.

He acknowledged that in bringing the robots to the strip club, the project has strayed from his initial vision.

Managing partner at Sapphire Gentlemen's Club, Peter Feinstein, says he hired Walker's robots because some people might not ordinarily feel comfortable in a strip club.

"So we were trying to appeal to a different audience who might say: 'wow that sounds fun'. You have six people here from a company, three men, three women, saying let's go check out the stripper robots where on a normal basis they might not want to come to a gentleman's club", he said.

Estonian War robots are put through their paces