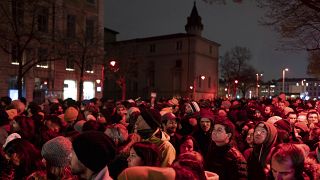 In these dark winter months marred by concerns about energy costs, the lights are being turned on in cities across Europe, illuminating the streets and uplifting those walking along them.

Having travelled from Jyväskylä in Finland, through Eindhoven in the Netherlands, Craig Morrison's light installation Beacon of Hope has arrived in Lyon for the city's famous Festival of Lights.

The Scottish artist worked with teams in Finland and the Netherlands to create his wooden sculpture illuminated by warm light and decorated with ribbons, to promote community inclusion.

In fact, the project also involved young migrants who are often live on the fringes, excluded from local communities.

It’s really, really unusual, I think, to engage with local participants, and then to engage with these young migrants, and bring them together to work and to understand each other. To get them to hold the ladder, while another person is going up and adjusting a piece of light. It’s a really positive really humbling experience for me to work in that way, because they’re just a story on the news normally, whereas you get to meet them and it’s kind of incredibly powerful.

In the midst an energy crisis and while the world re-evaluates our consumption of electricity and unsustainable materials, light festivals may seem unnecessary and environmentally damaging, but Morrison's project has been created to meet those modern challenges.

The central structure is made from wood, a readily available resource which absorbs CO2, unlike steel and aluminium or steel which create greenhouse gases in their manufacturing process.

Director of events at Lyon's Festival of Light, Romain Tamayo said that he had an idea "that emerged in connection with this festival, and I wondered what could we do together to think-up new ways of creating, that are both sustainable in their design, and also participative, and which highlight our cultural differences, because we know that light is also something very cultural."

Head of Lighting Community International, Mark Burton-Page, said that Beacon of Light is a shining example of how light festivals should continue into the future.

"It’s probably the future of these types of events to be more collaborative, to be more sustainable, to be more inclusive, more participative, work with the communities directly in the neighbourhoods, and do things together."