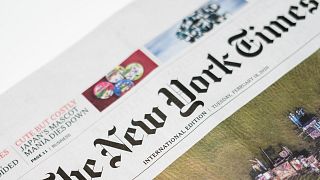 This is the winter of the walk out.

The UK has faced the biggest series of industrial strike actions across its rail networks since the 80s. Later this month, ambulance services will strike and the border force is also planning action.

Across Europe, train networks are preparing for stoppages as workers unions demand better conditions across the board as the cost-of-living crisis deepens.

Now the culture sector is having its own reckoning with the first day of strikes from the New York Times Union.

This is the first major walk out for the international newspaper's reporters and editors since the 70s.

It is one of the most widely circulated newspapers on the planet and employs around 5,000 people with more than 1,800 people in the Times newsroom.

Over 1,100 employees signed the pledge to strike for 24 hours.

The New York Times journalist teams rarely strike. There was a brief walkout in 2017 and a strike lasting less than a day in 1981. The last strike significant enough to stop the publication of the newspaper was in 1978, when press workers walked out for 88 days.

The Guild only covers the US-based staff, so the newspaper's large international teams are not included and will continue to work.

40 bargaining sessions have taken place between the Guild and the newspaper to renegotiate the contract, but negotiations failed over issues of pay, health and retirement benefits, among other issues.

“Their wage proposal still fails to meet the economic moment, lagging far behind both inflation and the average rate of wage gains in the US,” the union said in its announcement that it would strike.

“Strikes typically happen when talks deadlock. That is not where we are today,” Kahn said. “While the company and the NewsGuild remain apart on a number of issues, we continue to trade proposals and make progress toward an agreement.”

The union claims that pay rise offers from the newspaper have not been adequate and also questioned a rating system for journalists that disproportionately gives preferential treatment to white union employees.

The New York Times isn’t the only newspaper whose staff are striking for better conditions. The smaller newspapers Fort Worth Star Telegram and the Pittsburgh Post Gazette are both mid multi-week strikes.

Earlier this year, UK journalists went on strike as part of an action organised by the National Union of Journalists after salary negotiations broke down. As a result of the strike, 700 journalists secured pay rises.

300 US Reuters journalists walked out in November for 24 hours as the writers complained about salaries while the company experienced increased revenue.