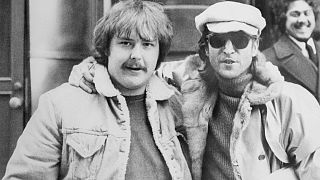 On the evening of 8 December 1980, former Beatle John Lennon was shot and fatally wounded in the archway of the Dakota, his residence in New York City.

The killer was 25-year-old Mark David Chapman, an American Beatles fan who said he was inspired by the fictional character Holden Caulfield from J.D. Salinger's novel "The Catcher in the Rye."

Amateur photographer Paul Goresh (above - left), who describes himself as a life-long fan of Lennon, took the last photo of the rock star when he was alive.

The last professional photo of Lennon was taken by Annie Leibovitz, who took a portrait of Yoko Ono and John Lennon hours before he was fatally shot. Leibovitz was photographing for Rolling Stone Magazine when she shot the iconic image of Lennon curled up against Ono.

Rolling Stone published the polaroid on the cover of its January 1981 issue.

1995: The Grateful Dead announce they are breaking up after 30 years, a few months after the death of bandmate Jerry Garcia.

Talk about a doomed day for music...