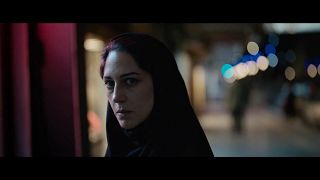 The European Film Awards will be handed out in Reykjavik this Saturday (10 December) and several nominated films stand out for their outsider's perspective. Among them: Saint-Omer by French director Alice Diop, who's the daughter of Senegalese parents, and Holy Spider by the Danish director of Iranian origin Ali Abassi.

One of the highlights at Cannes this year was when exiled Iranian actress Zar Amir Ebrahimi won the Best Actress Award for her role in Holy Spider.

"I think the advantage of a film like this, when you shoot outside Iran, is that you can develop it in deeper layers," Ebrahimi told Euronews Culture. "Whereas in Iran, because of the censorship, you can never really develop a story like this. In my opinion, Iranian society will change thanks to women, and that's why the government, the men, are so afraid of women."

The film, co-produced by Germany, Sweden, Denmark and France, shows Europe's ambition to tell stories that break down borders.

"I don't think it's more or less an Iranian movie because I live in Denmark, or another actor lives in France, and another guy comes from Turkey, and it's shot in Jordan," says director Abassi.

The universality of the black body

Up for Best Director award, Alice Diop won the Silver Lion and Best First Film Award at the Venice Film Festival for Saint-Omer.

The body of a black woman can say the universal and speak to all women, to all men of the world, whether they are white or black.

It's based on a French news story from a decade ago when a young, educated black woman let the sea take her 15-month-old daughter away, without any apparent motive.

"I am convinced that the black body carries the universal," said Diop in Venice. "And in a certain way, this prize is a way of proving something that for me is eminently political: the body of a black woman can say the universal and speak to all women, to all men of the world, whether they are white or black. It's something fundamental for me."

Two other women have multiple nominations: Carla Simón for Best Director and Best Film for Alcarràs, a feature about threats to family and rural life in Spain and elsewhere. She won the Golden Bear at the Berlinale.

And with three nominations, Marie Kreutzer and her film Corsage is also a heavily fancied outsider.

A co-production between Austria, France, Germany and Luxembourg, it tells the tragic story of Elizabeth of Austria - known as "Sissi" - a rebel and feminist before her time.

Euronews Culture will be live streaming the award ceremony in Reykjavik on Saturday night. You can also get exclusive access to what's happening during the event by following our social media sites.