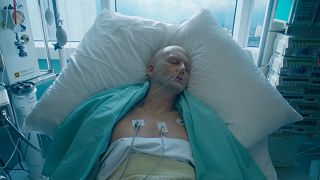 British actor David Tennant vividly remembers seeing the image of former Russian spy Alexander Litvinenko lying in a hospital bed in the news back in 2006.

It's a photograph he has recreated, with support from make-up artists, prosthetic professionals and the art department on new mini-series Litvinenko.  The drama, written by George Kay, follows the investigation into what happened after the KGB-agent-turned-Putin-critic was poisoned to death in London.

Tennant says the team behind the show were motivated to get the story right and felt the "weight of responsibility" of recent history upon them.

"The ripples of this moment are still being felt in the pond we're all still swimming in," he said.

"Everyone wanted to approach this with a respect for the material, that perhaps goes above and beyond what one might more readily expect."

Litvinenko died in London after drinking tea laced with radioactive material polonium-210 in a hotel with two Russian men. He spoke to police from his hospital bed, starting the investigation into what would be his murder.

"There were so many elements and unpredictable elements that were part of this story that it could so easily never have been told," Tennant said.

"The very fact that Sasha (Litvinenko) had to survive against the odds, the overwhelming odds, for as long as he did, for them to be able to identify what his poison was, where it comes from, how this had happened, because there were no precedents."

The European Court of Human Rights last September backed the findings from the 2016 British inquiry -- that Russia was responsible for the killing of Litvinenko.

Tennant said the new series has never been so relevant.

"This is all about a state or one man or the state of one man and how that impacts our lives across the world," he said.

"And that's certainly gives us pause for thought. It's alarming. And we can't let him (Putin) off the hook."

Litvinenko debuts on AMC+ and Sundance Now in the US on 16 December.