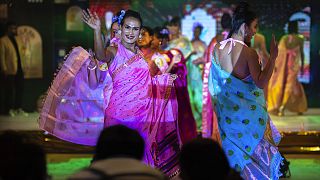 Anilya Boro may not have won the crown at India's Miss Trans NE pageant this year, but competing while having her parents there to support her was a validation in its own right.

"I must prove to my parents that I can do something as a girl," said the 22-year-old.

"I didn't win a title, but I am very happy that my parents were at the show to support me. Now they have accepted my decision to live as a girl and undergo surgery, but they don't want me to rush through."

Twenty transgender women walked on a stage dressed as ethnic and tribal characters in the beauty pageant, drawing rounds of applause from the audience.

The contestants came from India's eight remote northeastern states, some of them nestled in the Himalayas in a relatively undeveloped region known for its stunning natural vistas.

The event on Wednesday promoted the beauty and uniqueness of the northeastern region and community pride to uplift the transgender community, said Ajan Akash Barauah, the organiser.

It was not easy to hold the show with no corporate funding. Barauah turned to friends and organisations supporting the transgender cause to finance the pageant.

Sexual minorities across India have gained a degree of acceptance, especially in big cities, and transgender people were guaranteed equal rights as a third gender in 2014.

But prejudice persists, and the community continues to face discrimination and rejection by their families. They are often denied jobs, education and health care.

Barauah lived in the Indian capital for 13 years as a fashion designer and moved to her hometown of Guwahati in northeastern Assam state after the COVID-19 pandemic hit the country.

She won the title of Trans Queen in 2014 in a pageant held in the southern city of Vishakhapatnam and later decided to help the community in the northeastern region.

"The Miss Trans NE pageant on 30 November was only for (those) who identified themselves as women. Next year, it will include transgender men as well,'' Barauah said.

Boro is keeping her sights high, dreaming of one day winning the Miss Universe title. Her mother, Aikon Boro, said Anilya wore only girl's clothes since she was 6 or 7, feeling the most comfortable in them.

"Everybody in the family tried to change her habits and behaviour, but she didn't listen. Now the family members have accepted her as a transgender person,'' she said.

The top prize at Miss Trans NE went to Lucey Ham from Itanagar in Arunachal Pradesh state, which borders with China, while Aria Deka and Rishidhya Sangkarishan, both from Assam in the far northeast, were runners-up.

"I am overwhelmed with joy. I have nothing to say. I will never forget the biggest moment of my life," Ham said after she was crowned the winner.

Creating awareness about transgender people and educating them about their rights was what got Barauah involved with the event.

"They should know about gender equality everywhere. Even when you go to the office or a hotel or a public toilet you have the right to ask for proper facilities," Barauah said.