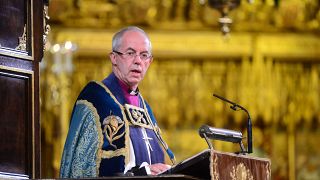 Archbishop of Canterbury Justin Welby makes an address during a National Service to mark the centenary of the Armistice at Westminster Abbey, London.   -   Copyright  Paul Grover/AP
By Jonny Walfisz  •  Updated: 04/12/2022

For the first time ever, Christianity is no longer a majority religion in England and Wales.

It’s just the first of many interesting results to come from the 2021 census, revealed earlier this week. Just 46.2 per cent of the population described themselves as Christian, down from 59.3 per cent a decade earlier.

It’s a drop of about 5.5 million people but it still remains the largest single defined religion.

Christianity’s new status as a majority minority religion in the country presents a few intriguing questions. Church of England is the state religion of the UK. How should the country respond to its established faith becoming a minority? And on the other hand, how will the news of dwindling Christianity be used by far-right political thinkers and proponents of the Great Replacement Theory?

Where have all the Christians gone?

What’s behind the reduction in self-identifying Christians in England and Wales?

“Immigration has a part to play, but I think it's very much over exaggerated,” says Dr James Williams, Senior Lecturer in Science Education at the University of Sussex says.

When looking at immigration from west African countries such as Nigeria and Ghana, many of those people are religious Christians. “This goes against that idea that immigration is pushing religion down,” Williams suggests.

Instead, Williams argues that the answer is found in the biggest real-figure increase in religious identification: no religion.

“Is it surprising when what we're trying to do to our nation is to educate it to be critical thinkers, to not take things at face value, but actually investigate and to talk about whether or not you know information is reliable,” Williams says.

As people grow increasingly well educated, Williams suggests there will similarly be a loss of faith among the population.

But that doesn’t mean the Church doesn’t have a place in modern life.

“I think the job of the churches, the mosques, the synagogues, and everywhere else, is to be welcoming places where children can go and explore those faiths,” Williams says.

“What they need to do is to concentrate on those aspects that they're very, very good on,” he continues. “That’s care of the community, which is looking after their parishioners and giving people a place to come to share their hopes, their dreams, their fears, among other things.”

The need for spiritual community is still there, even if it isn’t manifesting in as many self-identified Christians, suggests Dr. Heidi Campbell, a professor in religious studies at Texas A&M University.

“One of the largest percentage increases comes from groups that are spiritual but not affiliated with a specific religious community,” Campbell says.

The greatest relative increase of any religious affiliation was for Shamanism. 8,000 people identified as Shamanist in 2021, compared with just 650 in 2011.

Shamanism itself is defined on its UK website as “not a religion, more an authentic expression of mankind’s spirituality”.

“Anglicanism is still by far the largest religious community in England and Wales, and far exceeds the number of people identifying as 'no religion',” he notes.

Additionally, when considering the role of religion within society, he notes that participating and believing in a religion’s tenets are a separate matter from self-identification.

In fact, participating in religious activity is far less common than identifying with a religion.

26 per cent of adults in England and Wales participated in religious activities at least more than once a year with nine per cent doing so weekly. Almost half of adults felt that religion made at least a little difference to their lives.

56 per cent of adults reported holding a religious identification, participating in religious activities at least once a year or believing that religion makes at least a little difference to their lives.

“In other words, most adults in England and Wales are still 'religious', even if they don't necessarily identify with an established religious community,” Fox says.

If there is a shift in the political authority and influence of the Church in England, what will that mean for politics?

According to Fox and co-author Dr Ekaterina Kolpinskaya’s research, religion has an under-appreciated effect of voting behaviour..

“Anglicans were the most likely of the largest Christian communities to support Brexit in 2016, with 55% voting Leave,” Fox’s research details.

“Anglicans have long been more likely than the average voter to support the Conservatives and less likely to support Labour; indeed, the Church of England has historically been known as the 'Conservative Party at prayer', such has been the link between the two.”

“Our research shows that in recent years, this effect has become even more pronounced - Anglicans are even more likely to back the Tories relative to the average voter than they used to be,” Fox explains.

As Brexit was voted for and the Conservative party are currently in power, it would seem to correlate with the Church of England’s status as still the largest religious group in England and Wales.

But if there is a continued shift in the UK away from Christianity, then conservative political bases may be threatened.

The result of that feeling of threat, potentially stirred up by headlines of the recent census results, could lead to questions about a declining Christian culture in the country.

“Indeed, several columns have already appeared in newspapers and comments on Twitter bemoaning that decline of Britain's Christian community, usually with reference to the (exaggerated growth) of Muslim communities,” says Fox.

It’s not hard to find examples.

In a Reddit thread pointing to an article debunking Farage’s inaccuracies on the United Kingdom subreddit, there were countless comments expressing concern for a changing culture of the country.

“The fact is why would anyone want to be a minority in their homeland? People on here are saying “who cares” but when our history and heritage is constantly being told to be “decolonised” and “is too white” by second and third generation immigrants that doesn’t spell diversity and multiculturalism to me, that spells trying erase one culture for another,” writes one user.

Although many other comments take the opposite opinion, the fear of a diluted culture is rife.

“With a shift in religious authority, there is, as we’ve seen in the US, the rise of Christian nationalism,” explains Campbell.

“I wouldn't be surprised if in the next five to 10 years, in the UK, you see a lot more movements towards Christian nationalism,” Campbell says.

The Institute for Strategic Dialogue (ISD) is a think-tank focusing on rising polarisation, extremism and disinformation worldwide.

“Since the day of the release of the religion stats from the census, we've seen a noted uptick in rhetoric around great replacement, white genocide, and the far right narrative that white people are being replaced in Western European countries,” explains Tim Squirrell, ISD head of communications and editorial.

But, as his colleague Milo Comerford, head of policy and research, counter-extremism, points out - “the real macro trend that we're seeing is essentially a secularisation of society.”

As discussed above by Williams, Campbell and Fox, the vast proponent of Britons no longer identifying with Christianity is down to an increase in non-affiliation with any particular religious organisation.

For extreme political commentators, this has nevertheless presented an opportunity to bemoan a decline of Christian traditional values in society, in place of what they consider threatening groups, like the LGBTQ+ community and Muslim immigrants.

“The manifestation of Christian identity is not particularly politicised in the way that Evangelical Christianity is in the US,” Comerford notes. But while few mainstream politicians in the UK will align with these views, Squirrell considers, it is concerning how great replacement theories and Christian values concerns are growing in fringe groups.

White Genocide is the conspiracy theory that a majority white population and culture is being purposely eroded, often blamed on Jewish groups. It’s sometimes also called ‘the great replacement’.

“What we've seen over the last little while is the shift to ‘replacement theory’, rather than the great replacement to remove the elements of a conspiracy entirely and make it seem as though it's just a kind of way of viewing the world and understanding of dynamics that are actually happening,” Squirrell explains.

By labelling what is ultimately an antisemitic conspiracy theory as a matter of statistics, people can manipulate statistics to feed the conspiratorial fire.

The census data comes from the UK government body the Office for National Statistics (ONS). Characters like Farage present real figures from the ONS, making what they do more complex than disinformation.

Instead, they pull from authoritative sources and skew a perspective for their views. This “malinformation” as Comerford refers to it, gives credence to their manipulation.

“The weaponization of data has changed enormously in the last 10 years, since the last census released in 2011,” explains Comerford. Educating the public to how Islamophobia, conspiracy theories and far-right extremism manipulates people is therefore essential.

One of the best ways to tackle the problem, Comerford finds, is to “pre-bunk” conspiracies.

“Explaining to people that they might be told something and why it’s not the case, is quite a successful way of reaching potentially vulnerable populations,” he says.

“Rather than trying to change people's minds afterwards, it highlights to them the kinds of narratives that information might be manipulated.”