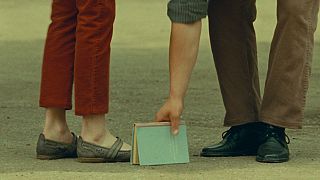 What a joy it is when a film that premieres at a film festival doesn’t get lost in the shuffle and finally gets to be seen by the public - even if it isn’t in theatres and arrives one year later.

After having premiered at the 2021 Berlinale in Competition, What Do We See When We Look At The Sky? is finally out on streaming platform MUBI, and it’s not one you want to miss.

Aleksandre Koberidze’s Georgian-German co-production is a stunning modern fairytale that explores the magic of chance encounters, the celebration of the extraordinary that we so often dismiss as the humdrum of day-to-day life… and the (non-Qatari) World Cup.

It is, with no hint of hyperbole, a transcendent masterpiece.

Kutaisi, on the Rioni River - Georgia.

You randomly bump into someone, and pick up the book they’ve just dropped.

Without warning, that’s it: somehow, you’ve fallen in love.

We witness this Bressonian meet-cute between pharmacist Lisa (Oliko Barbakadze) and footballer Giorgi (Giorgi Ambroladze), who arrange a date for the following evening.

Disaster strikes when the Evil Eye’s dastardly ways come into play. Indeed, a spell is cast on them and their physical appearances are transformed, meaning that when the two cursed would-be lovers (now played by Ani Karseladze and Giorgi Bochorishvili) show up to the rendez-vous, they no longer recognise each other…

With this change of appearance also comes some other problematic shifts. Giorgi can’t play football anymore, while Lisa can no longer practice as a pharmacist. Both have to find a new wave of living - with the two taking up new jobs mere metres from each other…

It’s rare to see a film that genuinely celebrates the extraordinary in the everyday and sees traditional folklore and curses as part of the very fabric of day-to-day life. There’s also a noticeable lack of intrusive technology throughout the film, as if to say that our dependence on screens has numbed us to fully seeing beauty in the seemingly mundane.

The camera gives a lot of time to the city of Kutaisi, but also gives equal time and framing to all things non-human, like dogs, grass, drainpipes and, of course, football.

We experience this through the lush and transportive cinematography by Iranian DP Faraz Fesharaki, who makes the city feel like a timeless bubble. He utilizes a mix of digital and soft-grained 16mm camerawork in order to conjure up a dream-like haze, one which unblurs in a gently poetic manner.

It’s in this dreamscape that Koberidze crafts a beautifully orchestrated bedtime story, an ode to the unseen forces that bring people together, and which culminates in a metatextual resolution that can be interpreted as a valentine to the magic of cinema and its transformative effects.

After all, on the same level as a curse, cinema is a form of magic, one which reveals something that the eye can’t always see.

What Do We See When We Look At The Sky is a beautifully romantic and mischievous folktale whose soulful ruminations on identity and perception strike a truly invigorating chord. Granted, its 151-minute runtime won’t be for everyone and its loose narrative is powered by folkloric whimsy rather than traditional logic. But get on it’s wavelength and you’ll want to bask in this particular blend of timeless romance and magical realism for twice the runtime.

What Do We See When We Look At The Sky? is currently streaming on MUBI.