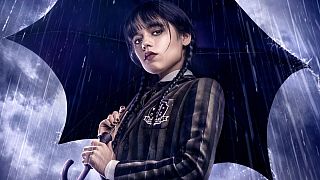 Netflix has a new top dog on its hands with supernatural comedy-horror television series 'Wednesday.'

The Addam’s Family spin-offknocked fan favourite 'Stranger Things' off the #1 spot for opening week viewing figures, clocking in an impressive 341.2 million hours of viewing globally in the first week it was available on the streaming giant’s platform.

Netflix estimates that 50 million households globally have watched some or all of ‘Wednesday,’ which stars Jenna Ortega as the eponymous daughter of America’s spookiest family.

The show reached #1 in 83 countries around the world and boasts a cast packed out with heavyweights and audience favourites like Catherine Zeta-Jones, Gwendoline Christie, and Christina Ricci, who played the original Wednesday Addams in Barry Sonnenfeld's 1991 and 1993 films.

However, neither ‘Stranger Things’ or ‘Wednesday’ were able to top Netflix’s biggest opener, ‘Squid Game,’ which racked up 571.76 million hours of viewing in its first week.

‘Wednesday’ follows the exploits of Wednesday Addams, the daughter of Morticia and Gomez, as she attempts to solve a monster mystery at her new school.

It is the latest iteration of the Addams Family franchise which began as a cartoon in the New Yorker before being made into an iconic TV series, two films and a Tim Burton animation.Four out of the eight episodes are directed by Tim Burton, who also serves as executive producer.

The viewing figures are especially good news for Netflix at a time when the streamer is battling competition from giants like Amazon Prime, Apple TV, and Disney+.

Earlier this year, amid a drop in subscribers for the first time, Netflix announced it would be adding adverts to its services to increase revenue.