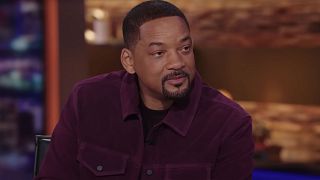 For the first time since Will Smith infamously slapped comedian Chris Rock across the face, live on TV during the Oscars, the actor has made his first late-night TV show appearance.

Speaking on the Daily Show with Trevor Noah, Smith describes the experience as "a horrible night" and explains how "hurt people hurt people."

"I was going through something that night," the Oscar winner went on to say, but didn't elaborate on what that was.

At the 94th Academy Awards, a buoyant spirit was rocked by an unbelievable exchange after Will Smith took offence to a joke made by Chris Rock about his wife, Jada Pinkett Smith - specifically a joke aimed at her haircut.

After Rock joked that he was looking forward to a sequel to G.I. Jane, Smith stood up from his seat near the stage, strode up to Rock and slapped him.

After sitting back down, Smith shouted at Rock to “keep my wife's name out of your f***ing mouth."

When Rock, who joked about Jada Pinkett Smith while hosting the Oscars in 2016, protested that it was just a G.I. Jane joke, Smith repeated the same line.

Later in the ceremony, a tearful Smith won the Best Actor Oscar for King Richard, his first Oscar.

The moment shocked the Dolby Theatre audience and viewers at home.

Since the incident, the Fresh Prince of Bel-Air actor posted a nearly 6-minute long YouTube video, where he answered questions that appeared to be written by people online about the Academy Awards.

"Chris, I apologise to you. My behaviour was unacceptable and I'm here whenever you're ready to talk", said Smith in the sit down YouTube video.

But he recently made his first talk show appearance following the Oscars, to promote his new film Emancipation, which is to be released next week.

"There's many nuances and complexities to it. But at the end of the day, I just lost it," explains Smith on the Daily Show with Trevor Noah.

"I understand how shocking that was for people," he told the host. "I was gone. That was a rage that had been bottled for a really long time."

"It was a lot of things. It was the little boy that watched his father beat up his mother. All of that just bubbled up in that moment," added the actor.

Further discussing the reasons for the slap, Smith says, "I guess what I would say is that you just never know what somebody's going through".

Smith, who has been banned from attending the Oscars for 10 years, said that the idea that the hard work of the crew for his new film might be overshadowed because by his actions was "killing me dead".

"These top artists in the world have done some of the best work of their career," Smith explains. "I hope that their work will be honoured, and their work will not be tainted based on a horrific decision on my part."

Check out the video above to see a short section of Will Smith's interview.

Who's backing who? Hollywood divided over Will Smith's Oscars slap