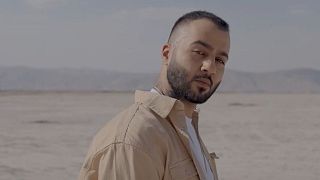 Tamooj Salehi was arrested in October during the ongoing protests in Iran   -   Copyright  Twitter/@OFFICIALTAMOOJ
By Euronews  •  Updated: 29/11/2022

Iranian rapper Toomaj Salehi has been charged with "corruption on Earth" and could face the death penalty.

The 31-year-old dissident musician - who has written and performed lyrics about everyday life in Iran - has backed anti-government protests and was violently taken into custody on 30 October 2022, after posting videos of himself protesting.

Salehi is among thousands of Iranians who have been arrested by the regime in its attempts to crush protests and civil disobedience in the country following the death of 22-year-old Masha Amini 10 weeks ago, on 13 September.

Who is Toomaj Salehi?

Salehi is a well-known artist who has released protest songs including 'Mouse Hole', 'Turkmenchay' and 'Pomegranate.'

The lyrics to one of his songs, released in support of the protests, spoke out against the Iranian authorities:

Lyrics which could cost him his life.

Salehi also uploaded videos of himself at the protests online.

In an interview with CBS, which took place only one day before his arrest, he acknowledged that this would draw the ire of the regime. He said that Iranians were "dealing with a mafia that is ready to kill the entire nation... in order to keep its power, money and weapons".

Following his arrest, which took place in the province of Isfahan, a video was released of security forces detaining a blindfolded man identified as Salehi who said he had “made a mistake”.

Family members later denied the man in the video was the rapper.

What is Salehi accused of?

Salehi may face the death penalty for “corruption on Earth” and has also been accused of “propagandistic activity against the government, cooperation with hostile governments and forming illegal groups with the intention of creating insecurity in the country,” according to state-run IRNA, quoting the Esfahan province judiciary.

The Isna news agency reported that he was accused of the "publication of lies on a large scale, in a way that has caused major damages."

Family members in Iran have said they believe the rapper has been tortured. They have not seen him since his arrest, and do not even know if he is alive. A UK-based cousin, Azadeh Babadi, has voiced fears that evidence may be fabricated against Salehi.

Other musicians and Iranians have expressed their concerns online and called for his release. They have been working to get the Persian hashtag of his name trending. These include rapper Hichkas and singer Mehdi Yarrahi.

Mehdi Yarrahi wrote: "With baseless charges, they want to teach a lesson to the others who do not fear death."

“A lot of rappers have come out and supported him,” Iranian rapper and activist Erfan Paydar told CNN.

“Toomaj’s bravery of protesting in the streets encouraged others to get out there and speak up and made people think ‘if he’s willing to go out there and he’s not scared, then maybe we shouldn’t be.’”

Six unnamed protestors have already been sentenced to the death penalty after being convicted of "corruption on Earth." According to Amnesty International, at least 15 other people besides Salehi have been charged with capital offenses, including Kurdish rapper Saman Yasin.

MEP cuts off hair to show solidarity with protesters in Iran