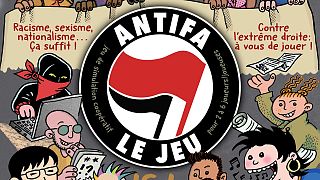 The large French retail chain Fnac has announced the withdrawal from its shelves of a board game ‘Antifa - Le Jeu’   -   Copyright  Libertalia
By David Mouriquand  •  Updated: 29/11/2022

It’s the pre-Christmas controversy that is threatening to ruin the festive mood in France.

The large French retail chain FNAC has announced the withdrawal from its shelves of a board game ‘Antifa - Le Jeu’ – a strategy game to fight the extreme right – created by an anti-fascist website. It did so after criticism on Twitter from a police union and several elected members of the far-right political party Rassemblement National (RN) – formerly the National Front.

“We understand that the marketing of this game may have offended some of our public. We are taking the necessary steps to ensure that it is no longer available in the next few hours," FNAC wrote on its official Twitter account in response to the national police commissioners' union (SCPN).

The SCPN called out FNAC about the Antifa game, accusing the shop of "promoting people who break, set fire to and attack in demonstrations".

Grégoire de Fournas, a member of the Rassemblement National, tweeted:

“Square 1: “I am blocking a university” - Square 2: “I beat up a right-wing activist” – Square 3: “I attack a meeting of the RN” – Square 4: I throw a Molotov cocktail at the CRS (French National Police). @Fnac aren't you ashamed?”

The Antifa game was designed by the anti-fascist collective La Horde as a "training tool." The Montreuil-based publisher Libertalia published it for the general public in 2021.

On its website, the publisher presents 'Antifa - Le Jeu' as "a simulation and management game in which you run a local antifascist group" by setting up "actions that will require time, resources, and a little organisation.”

Each player takes on the role of an antifascist activist charged with fighting the far-right, racism or sexism.

Libertalia denounced "false allegations from the far-right and then from the forces of repression" that led to the withdrawal of the game.

"You will not silence us!" the publisher added on Twitter.

Nicolas Norrito, co-founder of Libertalia, said he was "bruised" by the decision, according to French newspaper Le Monde.

No such thing as bad press

The French press and members of the public went into meltdown mode when FNAC announced the withdrawal of the game.

According to left-leaning newspaper Libération, "FNAC is submitting to the 'cancel culture' of the extreme right and betraying its values" – referring to the fact that the company was founded by socialist activist Max Théret.

Many have also commented on the hypocritical fact that the retailer’s website include works such as Adolf Hitler’s 'Mein Kampf' and far-right writer Renaud Camus’ ‘The Great Replacement.'

“Let's remember that the FNAC sells Mein Kampf by Adolf Hitler (original and translated version), and Le Grand Remplacement by Renaud Camus. But at least it has just withdrawn from sale "Antifa: le jeu", which "may have offended some of their public".

But since there is no such thing as bad press, and in the spirit of championing a backfire, the game has rapidly sold out on the Libertalia website in the wake of the outcry. It will not be available again until January, the publishing house tweeted.

“Thanks to your solidarity, the new edition of the Antifa game is sold out on our website. We will reprint it. But due to paper shortages, this will take several weeks and we will only be able to deliver in January.”

It seems that certain stockings will have to wait until January... You can bet that the far-right did Nazi-that coming.