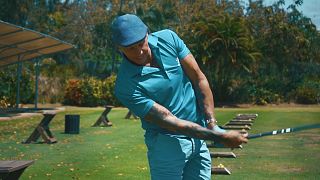 Pierre is a French ex-pat living in Mauritius. He discovered the southern part of the island during a trip with his wife to a hotel renowned for its golf course.

They bought a house there shortly after. “At first, our kids complained that it is too far away, but now they love to come and visit. We are a bit scattered all over France, so this is our meeting point”, Pierre told Euronews.

“The ideal day is to share moments, even very simple ones, with others”, Pierre says as he explains his lifestyle in Mauritius. Although he jokingly says that he is no good at it, he goes out fishing regularly to spend time with a local friend who is a fisherman.

“Mauritians like going out to fish together. They like showing you around and helping you to discover new things. They are generous, which is contagious because we also want to return the favour, " Pierre said. Pierre explained that the silence you can experience on the open water is another draw to the island. “Even without exchanging words, there is sharing, and those too are pleasant moments”, he says.

Pierre is a member of H.O.G Mauritius Island Chapter together with several other Harley-Davidson owners on the island. They frequently organise meets and explore the island together. “Visiting Mauritius on two wheels is different. We experience a different feeling and see other things”. Similar to his fishing trips, Pierre values comradery the most during his time on his motorcycle. “Every time we meet, there are big smiles on everyone’s face. The pleasure of riding together is special”, he added.

“When I came to Mauritius, I felt like I was starting a new life”, Pierre says as he reflects on his journey on the island so far.

Why Eugen Louis Rothen retired from Switzerland to Mauritius