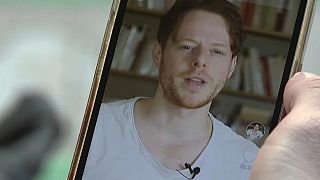 Those are just some of the questions asked on a new philosophy TikTok account that is making waves in France's educational system.

The “serial thinker” currently has over 100,000 followers on the social media app.

Lev Fraenckel, a 41-year-old teacher, started the account in May from his Strasbourg apartment. He uses pop culture to illustrate his philosophical points in his videos, a change from how he originally taught his lessons in his in-person classroom.

"I found a certain form of frustration as a teacher, to have students who came [to the classroom] against their will,” Fraenckel says. “And I thought that with videos, it could make them want to look for philosophical answers on their own."

But after moving to TikTok, his short three-minute videos quickly gained hundreds of thousands of views, many of whom were high schoolers flocking to the content while cramming for their philosophy exams.

Cyril Hadef, an 18-year-old medical student, was one of the students who used Fraenckel's videos as an educational tool. He got 19 out of 20 on his exam in June.

"I think it's thanks to him because, during my cramming period, I didn't look at my teacher's lectures at all,” he says. “I just watched the videos, took notes of the examples, learned them, and just added little personal culture left over from my literature exam. It turned out pretty well."

Fraenckel is currently on leave from the French education system, giving himself a year to make a living from TikTok.

And he is also releasing a book entitled, 'To help Terminale students pass the philosophy baccalaureate.'

Check out the video above for more on Fraenckel and his TikTok vids.

Tiktokers banned for creating a ‘nuisance’ at Nepal’s sacred sites