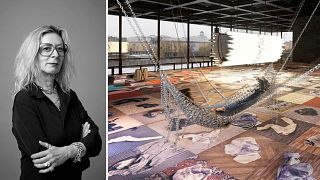 Berlin-based Italian artist Monica Bonvicini has been given free rein to transform the huge and bright upper floor of the New National Gallery (Neue Nationalgalerie) in Berlin.

Bonvicini was born in Venice, Italy, but moved to Berlin in 1986, three years before the fall of the Berlin Wall. She has lived there ever since, and it can be seen in her art.

She's taken the opportunity to reevaluate the imposing modernist building created by the legendary architect Mies van der Rohe, which she describes as "something very close to fear."

The show features two large architectural installations developed specifically for the space, including a gigantic mirror which divides the room and brings in even more natural light.

"I wanted to transform the architecture of Mies van der Rohe somehow so that it could give the people who will come and see the show a different view on the architecture," explains Bonvicini.

"But also, on the city that you can see very well around, through the glass facade," she says.

In addition to her large scale architectural interventions, several of Bonvicini's sculptures are on display, including her interactive "Chain Swings", which visitors are encouraged to interact with. The work perhaps acts as a nod to the nightclubs of the city that are often housed in run-down industrial buildings.

The exhibition also focuses on light - not just the abundance of natural light that flows through the large windows of the museum, but also light installations hanging from the ceiling.

For a example, a series of new light works, consisting of LED neon tubes hand-woven with electrical cables, illuminate a corner of the hall as a sculptural structure.

The exhibition is an attempt to change the masculine aura of the room, according to the director of the museum, Klaus Biesenbach.

Furthermore, while walking on the terrace around the glass hall, visitors can listen to a sound piece titled “Retrospective” (2022), which highlights Bonvicini’s conceptual use of language: a voice recites numerous titles of artworks that Bonvicini has created over three decades.

The exhibition titled "I do you" by Monica Bonvicini opens to the public on 25 November and runs through 30 April 2023.

Check out the video for a sneak peek inside the new exhibition.