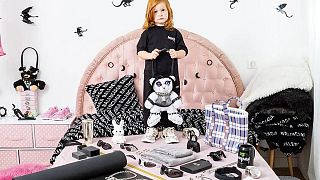 Luxury brand Balenciaga has taken ‘shock factor’ too far and has issued an apology for its recent advertisements featuring children with sexualized teddy bears.

"We sincerely apologize for any offense our holiday campaign may have caused. Our plush bear bags should not have been featured with children in this campaign. We have immediately removed the campaign from all platforms," the Spanish, Paris-based fashion house company wrote in a statement posted to its Instagram account.

The ads, which were originally posted earlier this week, were for the brand's new holiday gifting campaign. The photos, taken by National Geographic photographer Gabriele Galimberti, featured children posing with the company's plush bear bags, which wear BDSM-inspired harnesses.

One photo featured a child standing on a bed with one of the plush bear bags, surrounded by other purses and accessories that include what appears to be a chain leash as well as a Balenciaga branded dog collar choker.

The photos also received widespread criticism after many people noticed one of the campaign images used a Supreme Court opinion in a child pornography case as a prop promoting a handbag.

The court papers displayed are from the 2008 Supreme Court case, United States v Williams, in which the court upheld a federal law prohibiting the distribution of child pornography.

"We apologize for displaying unsettling documents in our campaign. We take this matter very seriously and are taking legal action against the parties responsible for creating the set and including unapproved items for our Spring 23 campaign photoshoot. We strongly condemn abuse of children in any form. We stand for children's safety and well-being," the company said in its statement.