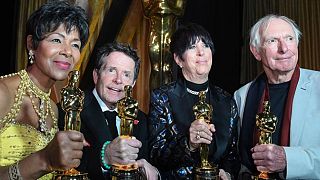 Now in its 13th year, the Governors Awards is essentially the Oscars chance to right past wrongs and correct some oversights. It presents special Oscars for lifetime achievements… and allows future Oscar contenders to begin networking ahead of lengthy Oscar campaigns for the coming year’s awards.

The four icons were celebrated by the likes of Michelle Williams and Paul Dano of The Fablemans, Cate Blanchett of Tár, Brendan Fraser of The Whale and Laura Dern of The Son.

Back to the Future and Family Ties star Fox, 61, was honoured with the Jean Hersholt Humanitarian Award, an Oscar statuette given “to an individual in the motion picture arts and sciences whose humanitarian efforts have brought credit to the industry.”

“He didn’t choose to be a Parkinson’s patient or disease advocate, but make no mistake it is his greatest performance,” Harrelson said.

“Vulnerable, yes. A victim, never. An inspiration, always and the living breathing symbol and singular voice to help advance progress toward a cure. The Michael J Fox Foundation for Parkinson’s research so far has raised over $1 billion for the cause. Michael J. Fox sets the ultimate example of how to fight and how to live, and today he is as beloved for his activism as he is for his acting.”

Fox was diagnosed with Parkinson’s disease in 1991. In 2000, he launched the Michael J. Fox Foundation for Parkinson’s Research, which has raised $1.5 billion for research into the disease.

“You guys are making me shake,” Fox said after receiving a standing ovation while accepting his award.

“It is a wholly unexpected honour and I’m truly grateful. (...) It has struck me that everything I’ve been given - success, my life with [wife] Tracy [Pollan], my family - had prepared me for this profound opportunity and responsibility. It was a gift."

“I’d like to say one more thing,” the 66-year old added. “One more time the words I thought I would never get to say but always dreamed I would. I've waited 34 years to say this: I'd like to thank the Academy.”

Weir, the director of Dead Poet’s Society and The Truman Show, reminisced about his late collaborators, such as Robin Williams.

“It was amazing to watch him when there wasn’t a crowd around, just two or three people, when he would will be seized by this inspiration and become this sort of extraordinary character,” Weir said of Williams.

Mindy Kaling, who hosted the event, spoke about the last honoree of the evening, Martinique-born filmmaker Euzhan Palcy, referencing her film A Dry White Season (which earned Marllon Brando his final Oscar nomination) or “what I used to call awards season.”

“Euzhan Palcy has had a fascinating life. But tonight I want to focus on her work. For it is through her work that she has made her mark speaking truth to power, pulling back the curtain on things that were hidden for so many, sharing with a global audience stories that needed to be told.”

Palcy, 64, was the first Black female filmmaker to direct a film for a major Hollywood studio - MGM’s A Dry White Season in 1989.

She shared why she stopped making films because she was “exhausted” by the effort of persuading people to believe in her.

Palcy also shared a message for the next generation of flmmakers:

“When you love something, don’t let anyone get you off track from your dream.”

Last year’s awards were postponed due to COVID and took place just before the Oscars in March. The Oscars will be held on Sunday 12 March 2023.