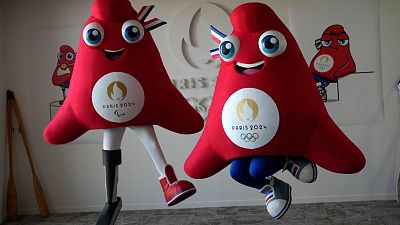 The mascot for the 2024 Paris Olympics and Paralympics has been revealed… And it’s quite the revolutionary move.

“It's the symbol of liberty, and it's also a very strong message linked to the revolution that we want for those games. We want those games (to be) a big success,” says three-time Olympic champion canoeist Tony Estanguet, who is the Paris 2024 president.

Fair enough, Mr Estanguet, but on closer inspection, it’s also a very strong message linked to the female anatomy. Because the mascots - quite aside from looking like lunatic Smurf hats - unmistakably resemble gurning plush clitorises with the cold dead eyes of a killer, who could be right at home in a particularly traumatic Cronenbergian fever dream.

The Vagina Museum, a hub dedicated to vaginas, vulvas and the gynae anatomy, does:

How this went past the (presumably all male or blind?) design and selection committee is beyond baffling. Surely someone in the office walked by the design studio with a bemused look on their face and queried “Hmm, those mascots look suspiciously familiar… BURN EVERYTHING INCRIMINATING!! BURN YOURSELVES!!!”

Or perhaps it was an intentional choice to promote a sex positive message through a particularly red inversed uterus? Or even a cheeky reference to last year’s impressive protests organised by the Manif pour Tous on the eve of Women's Rights Day, which saw hundreds of Mariannes denounce the alienation of women through assisted reproduction and surrogacy?

Whatever the case may be, they went for it. And the internet let them know exactly what they thought:

“Sorry but if you photoshop some small trainers and a French flag and we’re there.”

“Clits as mascots, the games are all about pleasure.”

“We could have had a beret, a baguette or even an Eiffel Tower, but no we chose a Phrygian cap that looks like a clit. Those involved in the decision making have nothing in their brains.”

At least French men now longer have an excuse when it comes to what a clitoris looks like. Or where to find it.

Mascots are meant to embody the Olympic spirit – emphasis on ‘body’ for 2024 – and connect with younger fans, in order to inspire the public to embrace more sports.

While the message seems to have been lost this time around, there’s also a concern that mascots should represent the Olympic Games at an international level. This raises the issue that many international audiences don’t know what the Phrygian cap is, or that the red bonnet was famously worn by Marianne and is the artistic personification of the free French republic. Therefore, many spectators from around the world will see, first and foremost, a clitoris.

Or not, as the case may be.

Anatomy aside, the shape of the mascot itself is not the only source of concern.

The shared manufacturing of the 2024 mascot was entrusted to two French companies, Gipsy and Doudou & Cie. More than one million toys are expected to be produced before the 2024 Olympic Games. However, reports have stated that only 20% of the total volume will be produced in France; the rest in China.

According to French outlet Ouest France, of the one million Phryges produced, only 200,000 will be made in the northwestern region of Brittany. The superior quality version will be designed in France, selling for €49.90. The price of the Chinese-made version will be €34.90.

French minister for Industry Roland Lescure responded to criticism over the “Made in China” scandal by saying that “20% made in France in not enough, but it’s better than nothing.”

“To do this, (the French company) is going to increase the size of its factory in Brittany and recruit employees. It’s a start.”

At the end of the day, give us a clitoris with Bette Davis eyes over whatever unholy monstrosity Wenlock and Mandeville were in London 2012 – there is not enough time or therapy in the world to undo the nightmares provoked by those drops of steel with cameras for eyes.

Take a look at the video above for a look back at the best (and worst) Olympic mascots. The Phryges are in good company…

Brace yourselves: The 2022 Sexiest Man Alive has been crowned