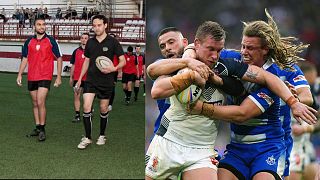 The Greek national Rugby League team have made it to the World Cup, but how did they overcome a government ban to get there?   -   Copyright  AP
By Tim Gallagher  •  Updated: 12/11/2022

On 2 August George Stilianos got some good news; he was no longer part of an illegal organisation.

“To have the paper in our hands was a huge feeling of relief; it was something we have been working towards for years,” says Stilianos.

Was Stilianos part of a radical political movement? Or part of a marginalised religious group? No, he’s the President of the Greek Rugby League Association (GRLA) and the paper he was holding said they had legal recognition from the Greek government.

“It was such a long and hard road that we started to wonder if it was ever going to happen.

“You start to believe something must go wrong, it is too good to be true. It was a big weight off all our shoulders.”

But how did a group of rugby players come to be in such a position? It’s a story of moonlit matches, illicit coach rides, and dastardly politicians that led the national team all the way to the World Cup.

Why was Rugby League banned in Greece?

Born in Australia to Greek parents Stilianos took an early interest in Rugby League, despite certain disadvantages, due to the ubiquity of the sport down under.

“I wasn’t the biggest of kids and I would watch a lot of Rugby League with my Dad but he wouldn’t let me play because he was scared of me getting hurt,” says Stilianos.

“But Rugby League being so popular in Australia in the schoolyard everyone was playing.“

After finishing school in 2008 Stilianos, ready for an adventure, booked a flight to his parents homeland not knowing when he’d return. Despite having a national team (staffed with Australians of Greek descent) between 2003 - 2010, there wasn’t much of a Rugby League scene in Greece and it wasn’t for another four years that Stilianos made the move to drum up interest in his beloved sport.

“I had always wanted to do it but I always thought I didn't have contacts. I didn’t have much of a network other than relatives.

“A few years went by and it started itching at me so I started a Facebook group about Athens Rugby League.”

This is how Stilianos met Anastasios Pantazidis, a big wig in the soon-to-be governing party of Syriza.

“Pantazidis got in touch and he was a former rugby union, he had a few players looking to try something new. We started training together and started a team.”

“We had a break away in 2015 and to be honest since there was no federation to begin with we weren’t breaking away from anything,” says Stilianos.

“The following year Syriza got elected. He [Pantazidis] was deeply involved in that party. He used dirty tricks to get Rugby League put into the pentathlon federation.

“That trapped us, suddenly he was legal and we were a bunch of rebels.”

Stilianos and his fellow Rugby League-lovers weren’t going to be deterred however and made the decision to continue playing despite the barriers they faced.

Rugby League was not outlawed altogether so they could still safely train and recruit team members, however they couldn’t play on public fields which are owned by the Greek government.

“We sometimes took the risk and a couple of times we got into trouble because of that,” says Stilianos.

Dodging the police and adopting mild espionage became par for the course, especially when the time came for international matches. The GRLA gained international recognition and their teams could play qualifiers for international Rugby League cups, however the privately owned land they usually played on wasn’t always up to the required standard.

“We had to get creative and play games out of town,” says Stilianos.

For one game a team from the island of Rhodes flew into Athens and the match was played on an out of town industrial estate at midnight.

“They flew in and flew out the next day. The game had to happen that night one way or another.

“They [the field owners] were fully booked until 11pm and we said we will take it. Sure enough we got there and a few matches had been delayed, it wasn’t until midnight that the field was free, it kicked off at 12:15.”

For a qualifier against Malta in 2018 that the Greek team went on to win 60 - 4 Stilianos insisted on complete secrecy, not even telling the players the game’s location.

“There were probably five players in all of Greece that knew where we were playing.

“We told them to get on the bus, don’t ask any questions.

“It was the first qualifier match if the cops had turned up and disrupted the game we’d have lost on a technicality.

“I felt bad because a lot of people’s parents wanted to come and I had to say sorry I can’t tell anyone. It wasn’t until 15 minutes before kick off I said `call your parents.’”

The measures may seem like paranoia but police had disrupted Rugby League matches before and taken people in for questioning; in such a tight-knit community things get around.

“Word can spread very quickly if you’ve got a rat in the ranks,” says Stilianos.

“They would be within their rights to say everyone go home this is an unauthorised sporting event.

“It was a huge relief when the full time whistle went. I would have been responsible if something had gone wrong. I don't want that on my conscience.”

Why is Rugby League legal in Greece now?

The international recognition that necessitated Stilianos and his team’s extreme measures proved, ironically, to be the very thing that got them legal status.

In February this year Stilianos had painstakingly gathered together all the documents he needed to submit to the Greek government for official recognition for the GRLA and heard nothing back.

“In Greece if you have got all the papers and everything they have asked for it can sit on a desk for three years and not even get looked at.”

At this stage, with the World Cup in the UK on the horizon, the President decided to ask for intervention from a higher power.

“We were able to get the British and Australian ambassadors to Greece involved,” says Stilianos.

“We explained the situation, they had started getting onto the Minister of Sport and said you need to look at it.

“If we didn’t have the World Cup coming up then the ministers may not have felt any need to get involved or not had a strong argument to put forward.”

Greece may not have performed well in the Rugby League World Cup (they lost to France, Samoa, and England) but while the team may not be returning home heroes, they at least can return home to play a match without fear of arrest.

Now there are over 200 Rugby League players in Greece across 13 teams; four women’s and nine men’s.

As for Pantazidis? There’s no hard feelings. Well, not that many.

“He turned out to be a bad apple but if he and I didn’t meet I am sure there wouldn’t be Rugby League in Greece today,” says Stilianos.

“Good things did come out of it even if we went through all the battle.”