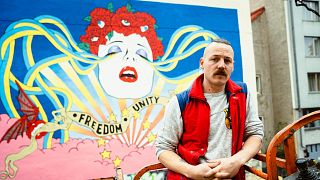 Murals have been created across Europe to symbolise Ukraine’s cultural ties to the continent.

In the face of continued Russian aggression, the Ukrainian Institute and cultural agency Port. have launched the project across five European cities: Vienna, Berlin, Geneva, Marseille, and Ankara.

The project ‘The Wall’ has started with two murals in Vienna and Berlin.

Each mural will have Ukrainian and European artists work together to create a symbol of mutual cooperation and shared cultural ties.

Murals will be launched soon in Geneva, Marseille, and Ankara, with the project lasting from November 1 to December 25, 2022.

The project is inspired by UK prog-rock band Pink Floyd’s concept film/album ‘The Wall’, where a jaded rockstar creates a wall to fence himself off from his inner demons.

“But the metaphor allows us to start a dialogue about the world's attitude towards Ukraine as "us and them". We wish to rethink and look at the mental and historical wall that still separates us. And which must be eliminated so that we feel like a single community,” Taylor says.

As the Russian war on Ukraine continues, the Wall signifies that despite the ways Russia wants to shut off Ukraine from Europe, the ties between the EU and the beleaguered country run deep.

“The murals are our response to Russian barbaric aggression on the cultural front in the civilisational war which Putin has launched,” says Emine Dzhaparova, deputy minister for foreign affairs of Ukraine.

“The policy of destruction and elimination of Ukrainian identity is one of Russia’s key elements in the war against Ukraine. In our temporarily occupied territories, Russian invaders close Ukrainian schools and impose their language and history. Just like they did for centuries regarding Crimean Tatars whose cultural heritage, history and traditions were simply denied,” she continues.

“If and where the invaders cannot physically throw their collars, they simply resort to terror,” Dzhaparova says.

“The list is growing every day. Today Ukraine is fighting not only for the right to exist but defends its right to be a family member of Europe,” Dzhaparova concludes.