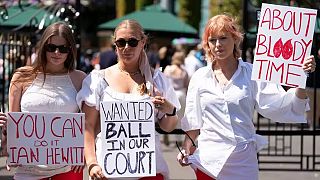 Wimbledon officials are expected to change their longstanding rules requiring women to wear white underwear before next year’s championships.

The news comes as certain UK football clubs like Bromwich Albion and Manchester City have also done away with white shorts, changing the old kit and replacing them with navy and burgundy colours for female players.

It also follows protests by fans and the Women’s Tennis Association (WTA) players against the all-white underwear rule, especially during athletes’ menstrual cycles. The protests which were staged at Wimbledon this summer saw the slogan “Address the Dress Code” on several placards.

The All England Club apparently has taken note and begun to rethink its policies regarding the dress code. They released a statement saying that “prioritising women’s health and supporting players based on their individual needs is very important.”

“We are in discussions with the WTA, with manufacturers and with the medical teams about the ways in which we can do that.”

The change could mean that the 'all-white clothing' rule will be limited only to the top layer of clothing.

The protestors this summer wore red skirts and shorts, inspired by Tatiana Golovin, the former Russian-born French player who sparked controversy when she wore red shorts under her skirt at the 2007 championship.

In the past, several female tennis players, including Serena Williams, also began to wear colourful underwear in the early 2010s.

However, Wimbledon released an updated dress code in 2014, stipulating that underwear must be white.

According to Wimbledon's dress code, all players, male and female are required to wear all white, including any undergarments that are visible, for both practice as well as matches.

"Competitors must be dressed in suitable tennis attire that is almost entirely white and this applies from the point at which the player enters the court surround," the official Wimbledon dress code reads, noting that white "does not include off white or cream."

The code continues: “Any undergarments that either are or can be visible during play (including due to perspiration) must also be completely white except for a single trim of colour no wider than one centimetre (10mm).”

Additionally, according to the dress code, shoes, hats, headbands, wristbands, and socks must also be white.

Bras too pink and bustiers too black

It's not the first time that these ludicrously specific clothing rules have become an issue.

In 2013, Roger Federer was warned because his shoes had orange soles, and Venus Williams was asked to change mid-match in 2017 after her pink bra was showing. After the match, an official explained: “Underwear should be white.”

In one incident this summer, Romanian tennis star Mihaela Buzărnescu was forced to switch bras with her coach a few minutes before her match, after officials demanded she changed her black bra.

In an interview with Eurosport, the 34-year-old said that her "bustier was too black and I had to change it."

“The white one I had was too transparent and you could see everything underneath and I couldn't wear it, so I borrowed from my coach, I took her bustier.”

The incident sparked debate online with many calling it indecent to make women change mid-game and in front of the crowd, while others defended the tournament’s traditions.

American tennis star and 12-times singles Grand Slam champion Billie Jean King was vocal about the issues faced by WTA players while wearing the all-white uniform during their menstrual cycle.

King said that women female players were worried about the bloodstains on the all-white dress they wore during Wimbledon.

Andy Murray’s mother, Judy Murray, was also part of the movement criticizing the all-white rule and calling for women to be allowed to wear non-white kit due to concerns for athletes who are menstruating. She noted in an interview with Sportsmail the “traumatic experience” of a possible leak on the white uniform while playing, and emphasized the importance of having more women among the decision-makers.

"It’s really important that we have lots of women on the decision-making panel because they understand what that’s like to have menstrual cycles and they understand the fear of that happening while playing."

Wimbledon now has a female chief executive, Sally Bolton, and hopefully this change means that the conservative Victorian social norms of Wimbledon’s earlier years will finally be given a more colourful upgrade.

'A perfect journey': Roger Federer bows out of tennis with final match

Russian and Belarusian players banned from Wimbledon over Ukraine war