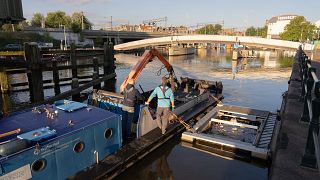 Plastic was hailed as a miracle material that transformed our modern way of life. Designed by American scientists, driven by the desire to help solve all of society's issues. Ironically, decades later, plastic is a global environmental issue damaging our ecosystem. The problem is widely known. Some people are doing their bit by decreasing plastic waste, using metal straws and opting for reusable groceries bags.

An environmental ocean protection group in the Netherlands decided to take action and created The Great Bubble Barrier. This technology stops plastic trash before it can reach the ocean.

The Gateway to the Ocean

Her co-founder Philip Ehrhorn expressed his dissatisfaction with the pollution issue and desire for a solution. "I spend a lot of time in and around the water. And inevitably, at some point, you'll see plastic. And once you start seeing it, you'll see it everywhere," explains Philip.

In an effort to halt plastic waste, Philip invented a trash-catching technology. The team developed a system that catches plastic over rivers' fu­ll width and depth.

"The Bubble Barrier system is mainly composed of three components: the barrier curtain itself, the catchment system that collects the plastic, and then the waste compressor," explains Phillip.

While this system may seem complicated, Anne explains it is a simple concept using air bubbles to filter, trap and remove plastics from waterways.

"Rivers and waterways are like the highways of plastic pollution. Most of the plastic in the ocean has travelled through rivers, and that's why we want to stop it right there," says Anne.

According to Maria Westerbos, the organisation's founder, this research is crucial to identifying the source of ocean pollution. "If you know what causes the pollution, you can act on it and stop it before it enters the water," Maria tells Scenes.

The pollutants found in the ocean are often surprising, even to those who study them. "One example of a plastic item we commonly find is laminated restaurant menu cards," says Philip.

A less harmful alternative to plastic menu cards is paper. Replacing plastic with paper may seem strange from an environmental standpoint, but its impact can be profound.

Often small plastic particles can cause enormous damage to ocean life. Philip explained to Scenes that his research helps inform people about contaminants that are easily avoidable.

Maria at The Plastic Soup Foundation estimates that humans produce 500 billion kilos of plastic per year.

Philip explains, "Once in the environment, it will stay there for years, probably centuries".

The plastic in the oceans is not just suffocating marine life but also affects humans. Recent studies by the University of Hull found microplastics inside human organs and bloodstreams.

Anne explains that this crisis requires immediate action to save our oceans and humanity. "If we don't stop it right now, we expect to have even more plastic in the ocean than fish by 2050," she says.

While The Bubble Barrier is an innovative, energy-efficient and non-invasive solution, Philip says there is no "single silver bullet solution" to solve this crisis.

The Great Bubble Barrier is a significant first step towards confronting ocean plastic pollution. The team is working tirelessly to expand the reach of their technology. "Our ambition is to roll this out internationally, to start making more impact," Philip tells Scenes.

With plans to expand to Portugal, Germany and parts of Asia, the Great Bubble Barrier team hopes to end plastic pollution in oceans worldwide, one bubble at a time.