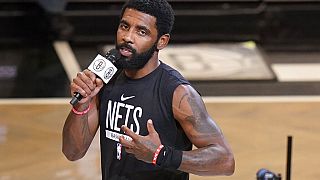 Shoe and sportswear firm Nike is clearly drawing a line in the sand over antisemitism and hate-speech with a decision not to launch footwear named after one of its biggest stars.

The firm has suspended its relationship with Kyrie Irving and canceled its plans to release his next signature shoe, the latest chapter in the ongoing fallout since the Brooklyn Nets guard tweeted a link to a film widely regarded as containing antisemitic material.

The shoe giant announced Friday night that it will halt its ties with Irving, who was suspended, for at least five games, a day before by the Nets for what the team called a repeated failure to “unequivocally say he has no antisemitic beliefs.”

Those actions followed widespread criticism from, among many others, the Anti-Defamation League and NBA Commissioner Adam Silver.

“At Nike, we believe there is no place for hate speech, and we condemn any form of antisemitism," the Beaverton, Oregon-based company said. “To that end, we’ve made the decision to suspend our relationship with Kyrie Irving effective immediately and will no longer launch the Kyrie 8."

Irving has had a signature line with Nike since 2014.

“We are deeply saddened and disappointed by the situation and its impact on everyone," Nike said.

Irving signed with Nike in 2011, shortly after becoming the No. 1 pick in that year’s NBA draft. Irving’s first signature shoe was released three years later, and the popularity of the Kyrie line led to him making a reported €11 million annually just from the Nike endorsement.

The Kyrie 8 was expected to be released in the next week. Previous models of his shoes were still for sale on the Nike website Friday night.

Irving posted a tweet — which has since been deleted — last week with a link to the documentary “Hebrews to Negroes: Wake Up Black America,” which includes Holocaust denial and conspiracy theories about Jews. In a contentious postgame interview session last Saturday, Irving defended his right to post what he wants.

The fallout only continued from there. The NBA put out a statement over the weekend that didn't name Irving but denounced all forms of hate speech. Fans wearing “Fight Antisemitism” shirts occupied some courtside seats at the Brooklyn-Indiana game on Monday night, a day after he took down the tweet. The Nets and coach Steve Nash parted ways Tuesday, a development that has been overshadowed by the Irving saga.

On Wednesday, Irving said he opposes all forms of hate, and he and the Nets each announced that they would each donate €500,000 toward groups that work to eradicate it. Silver then issued a new statement calling on Irving by name to apologize, and Irving refused to give a direct answer when asked Thursday if he has antisemitic beliefs.

That, evidently, was the last straw for the Nets, who suspended him. Hours later, Irving posted an apology on Instagram for not explaining the specific beliefs he agreed and disagreed with when he posted the documentary.

“To All Jewish families and Communities that are hurt and affected from my post, I am deeply sorry to have caused you pain, and I apologize,” Irving wrote. “I initially reacted out of emotion to being unjustly labeled Anti-Semitic, instead of focusing on the healing process of my Jewish Brothers and Sisters that were hurt from the hateful remarks made in the Documentary.”

Counting the cost of hate speech

Irving becomes the second celebrity in less than two weeks to lose a major shoe deal over antisemitism. Adidas parted ways with Ye — the artist formerly known as Kanye West — late last month, a move the German company said would result in about €250 million in losses this year after stopping production of its line of Yeezy products as well as halting payments to Ye and his companies.

For weeks, Ye made antisemitic comments in interviews and on social media, including a Twitter post that he would soon go “death con 3 on JEWISH PEOPLE,” an apparent reference to the U.S. defense readiness condition scale known as DEFCON.

Irving has expressed no shortage of controversial opinions during his career. He repeatedly questioned whether the Earth was round before eventually apologizing to science teachers. Last year, his refusal to get a COVID-19 vaccine led to him being banned from playing in most of the Nets' home games.

The Nets played at Washington on Friday, winning 128-86 without Irving. The 42-point win matched the fourth largest in Nets franchise history.

Brooklyn general manager Sean Marks said earlier Friday that Irving’s apology was a step forward, but many other steps will be required before he can resume playing.